a)  Introducing the Ultramorph

a.i) The Jocelyn Watts character takes on the Ultramorph in the script
In his Alien Engineers script, Jon Spaihts included the monster creature known as the Ultramorph.
It erupts as a chestburster from the Space Jockey now to be known as an Engineer in the mysterious derelict alien ship.
In Spaihts' mind, somehow this chestburster was more hideous than any other we've seen before.
Dark gray, armored and lethal, this thing would have been as big as a wolf even at birth.
Within a short time it grows to man height, before leaving the confines of the derelict ship, now known as The Juggernaut to hunts the character Jocelyn Watts (sater renamed Elizabeth Shaw) down amongst the wreckage of the Magellan (later renamed the Prometheus).

The creature impales her thigh with its tale as if it were a spear and as this thing is about to kill her, she rams a diamond bladed saw into it's face and kills it.

a.ii) Corrosive green blood
It bled acid blood that was coloured green and despite it's corrosive nature, she brings the head with her as a hunting trophy to hang over the door at the spaceship module belonging to the character Vickers

a.iii) No particular look to it
In this version of the script, Spaihts didn't actually describe it with any particular detail.

b) Ultramorph as the spacejockey's chestburster

b.i) Carlos goes home to work on the design
Carlos Huante had visited Ridley and discussed the design progression of the creatures to the great alien beast of the first film.
He went home after his visit and thinking about it, the first thing that he would do is start working on some designs for the creature known as the Ultramorph
b.ii) Connecting with the Space Jockey mystery
This alien beast that had erupted from the Space Jockey now called an Engineer, would become a fully grown Giger-esque biomechanical thing
In this earlier script, this Engineer would have been the Space jockey character from the original Alien movie but instead one that was a tall humanoid within a suit that gave the Space Jockey its strange look, so a Ultramorph would presumably grow into a tall near humanoid creature..

c) The return to Necronom IV

c.i) Necronom IV
He decided to go back to HR Giger's painting Necronom IV that was the starting point for the design of the alien beast in the origina film Alien released in 1979
Huante began to design an alien creature with a head similar to the character in this painting, complete with bulbous black eyes like a hell's angels motorcycle goggles
He wanted this to be a homage to HR Giger, bringing that artist's work back to the first film, whatever Giger might have said about someone copying his design in that way.
See HR Giger's Necronom IV
c.ii) Beluga whale shaped forehead variation
Huante followed his obsession with Beluga whales with their ghostly pale skin and bulbous forehead to the extent that he would include such a forehead in some of his designs for this beast
He kept on with designing variations of this it for a while before he had discussions with Ridley about taking the creature concept in a different direction.
c.iii) Other creatures
As he worked, he thought to himself "Wouldn’t it be cool if these Aliens who are born of humans and haven’t been mixed genetically with the Engineers, yet would look more human and less biomechanical".
Of course this was for a different version of the script that was where the creature known as the Bishop came from and soon was renamed the Deacon.
This Ultramorph would have been a giant albino creature, as if it were in Huante's mind a prehistoric version of the commonly seen great alien beast in the film series.
He would compare the difference being like a Mastodon in comparison to modern day elephants (although I might wonder if we compare it in terms of size to a mammoth that are closely related to elephants, since Mastodons weren't taller than modern day elephants anyway)
Perhaps this alien beast would have grown to about thirteen feet in height assuming that the humanoid in the picture further down showing below showing the size comparisons is of regular human height.

d) Ultramorph as the evil angels

d.i) As Angels
Huante thought of the Ultramorph as an evil variant of the Engineers that were in a sense for him Angels.
d.ii) Doing away with the biomechanics
He thought about how the big beast from the original Alien movie had what biomechanical patterns and shapes across its skins, which seemed to be an exoskeleton
Bur he decided in his notes that the Ultramorph should be covered with smooth skin as genetically it was still a new creature and its hosts were the engineers who are the tall humanoids with very pale human skin
d.iii) Regal quality
These creatures would have a regal quality abut them that would have been inspired by the Engineers as hosts

e.i)  Emergence of the biomechanoid alien
However instead of the Ultramorphs being clean and skin covered, after some discussion with Ridley and what needs to happen sequentially with the story of how they end up with this alien beast in the first film.
They would be the first we see of the bony exoskeleton on a creature.

e.ii) The nature of the ribbing
Huante had thoughts about what if the engineer technology is all that ribbing and bony architecture.
He would refer to it as filigree that's all over the ship and the alien beast itself.
e.iii) Difference in alien beasts born from human
With that idea, the alien beast that come out or are born out of the humans should be clean and the skin covered.
They would not be saturated with the genetic material of the source (Engineers) yet, so, they would be more human looking.

f) How the alien got its biomechanics?

f.i) Ridley's old idea
However during the production of Alien back in 1978, Ridley had developed the idea that the original alien beast's biomechanical look was inherited from the Space Jockey.
It was not really clear to Ridley how that would happen either, but he thought about it in Giger's painting as something that was a blend of organic and machine, perhaps right down to the level of DNA.
See: Alien: Life cycle of the beast
f.ii)  Engineer technology would form as water
Huante thought about the nature of the biomechanics almost as if he were talking about casting the alien suit in latex rubber.
He imagined that the engineer technology would form as water (Milky Liquid) that pours unnaturally upward and over them (The Engineers) to form bony plating or ribs and architectural surfaces, as if they controled it at a molecular level.
How the biomechanics would becomes infused with the alien Ultramorph itself remains unclear, but Huante went with the idea that the biomechanics was in the Engineer's genes.
This would mean that a human infected in the same way would give birth to a creature that was pale with smooth skin,
Only if the creature carried genetic material from the Engineers that would have been infused with their technology would it show signs of this biomechanical patterns.
f.iii) Steve Messings's take on alien beast as descendant of the Ultramorph
When Steve Messing would come to design the vast relief for Prometheus, he went with the idea that the Ultramorph was the pure form of this thing that the Engineers had created.
It was almost like a virus and this creature was in some way worshipped by them.
As the virus became spread and as if it were polluted, supposedly the creature in the Alien series that has come to be referred to as the Xenomorph was an evolutionary descendant that was not as pure.
See:  Prometheus: Giger-esque relief in the ampule room


g) Reproduction
Huante's had an idea for an alternative method of reproduction for the Ultramorph rather than just by the creation of the facehugger.
This thing would attack and bite, leaving the victim immobilized rather than injured or dead or ready to be cocooned.
It would pass its genes onto the victim either by saliva or some such thing into the host and mix with the host's genest to create a new creature
But having said that, he mentioned this idea was basically how his later idea, the "red Bullbox alien" reproduced and this was a step in the alien life form's evolution beyond a "neomorph" and the so called "Xenomorph" stage in the evolution of the alien beast and was not supposed to be one of these Ultramorphs at all , but it's an idea that could evolve further in his imagination
See: Carlos Huante's Red Bullbox alien
h) See: Prometheus: The Deacon 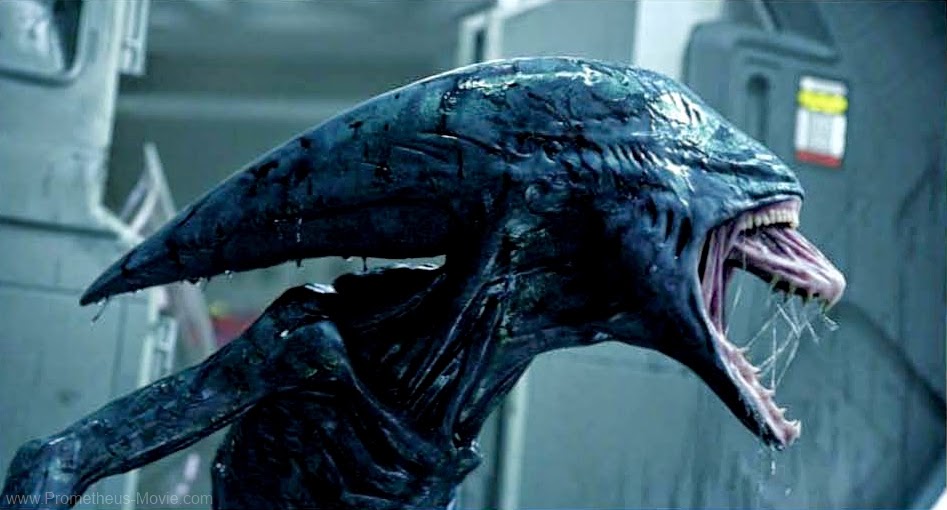 i) Another Ultramorph
Here Carlos Huante had another go at the Ultramorph developing some of the similarities to Necronom IV showing off some of the qualities of the head being like an eyebrow and the space at the back of the neck being like a eye space, belonging to the atrophied remnant of a cartoon character face.
Here the ribcage and back pipes might become like a side view of a leering face.
He shaped the back pipes as if there making it look as if there's a grin forming in the space between the lower back tendrils
The raised hand has become confusingly long
See: HR Giger: Necronom IV (work 303) (1976) references Hugo Steiner Prag's Golem's face?
Posted by wmmvrrvrrmm