leading from:
Prometheus - The Return of the Space Jockey
and
Prometheus props
and
Dr Zecheriah Sitchin

a) A small square carved tablet used in Ridley Scott’s movie Prometheus. This tablet is briefly seen during the briefing scene which is held by Dr Shaw (Noomi Rapace) and Dr Holloway (Logan-Marshall Green) where they explain the origin of the star map. The star map is shown to be the same throughout the historical evidence and leads them to mount the expedition to find the planet LV-223. This tablet is shown in the sequence to be Sumerian in origin dating from 3590 BCE and features heavily in the showcase.

b) The lower section of the tablet features a large angel figure seated on a chair with the hind leg of a cloven footed beast and the arm of the chair going to the top of the back is shaped like a serpent. He is addressing a group of people with symbol etchings carved behind them. The characteristic ‘star map’ which is analysed during the film, can be seen on the top section above the crowd scene. The square tablet is made from hard cast resin which has been painted and detailed in orange stone effect and chipped to give an aged appearance. It is mounted on top of a long green screen pole which was edited out to give the tablet a suspended appearance when used in the production. This iconic tablet is in fantastic production used condition and measures 62cm x 25cm (24.5” x 10”) including the pole.

c) The seated figure and the runes are based on the seated figure from a cylinder seal dating back to 2100BC, from Babylon in Souther Iraq. This seal is typical of the last century of the third and of the early second millennium BC. The scene is thought to depict Hashhamer being led by a lamma, before the seated king, and another lamma follows. And it's thought that possibly the king Ur-Nammu is bestowing governorship on on Ḫašḫamer, patesi (high priest) of Iškun-Sin. And then some have decided that the seated figure is Enzu or Sin the moon god, or if not, the moon god's presence takes on the form of the crescent moon. Ur-Nammu founded the Sumerian 3rd dynasty of Ur, in southern Mesopotamia, following several centuries of Akkadian and Gutian rule. After his death, his own son Shulgi proclaimed himself a god. However the seated figure has been given a circle around his head that might be like an angel halo or a goldfish bowl style helmet and a pair of angel like wings that are unlike the wings of most depiction Babylonian deities apart from one statue of the goddess Inanna known as The Burney relief however the figure of Inanna is not depicted from the side

d) The same scene that depicted Ur-Nammu, but with the larger seated figure approached by smaller people numbering three with the first one leading the second finds itself replicated a thousand years later in another instance where now the large seated human has become much larger and represents the deity Shamash who was the Akkadian god of the sun and of justice, and in Sumerian his name was Utu.

e) Zecharia Sitchen made popular the idea of a certain ancient Sumerian tablets with large humanoid depicting giants who are extra terrestrials also shows the Solar System. He used an Akkadian cylinder seal now at the Vorderasiatische Abteilung of the State Museum in East Berlin catalogued as VA/423 to demonstrate his main idea, dating back to the 3rd Millenium BC. The image between the two heads of the men on the right showed some sort of an arrangement of heavenly bodies. It was Zechariah's assumption that there were the sun surrounded by the 11 planets of the solar system which included the planet that broke up where the asteroid belt is found today, and the 10th planet is the planet Nibiru that he understands is out there, rather than the 12th Planet as in the name of his book "The Twelfth Planet" 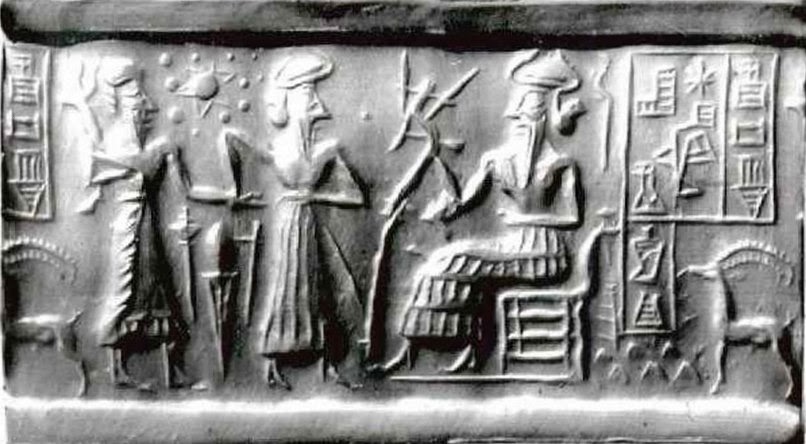