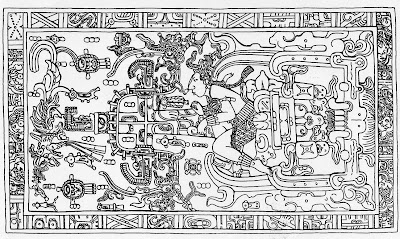 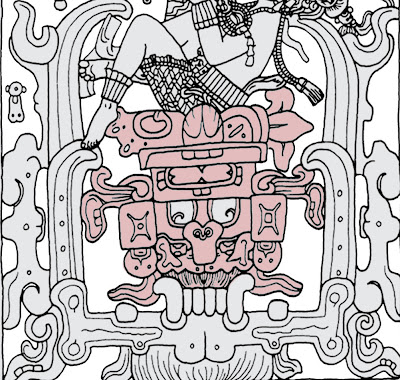 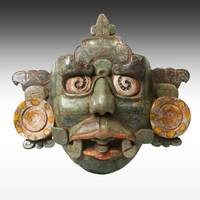 Mayan mask showing a depiction of the same monster, but considered here a God
. "An idealized portrait of God GIII of the Planeque Triad from
the Mayan lowlands, this mosaic mask is made of eighty-two individually cut
deep green mottled jade, spondylus and conch shell plaques. The mask’s large
squared eyes have distinctive spirally incised conch shell pupils, each carefully
highlighted by red pigment. The lower eyelids curl over the nose to form the
characteristic cruller loop between the eyes. The robust nose with slightly flared
nostrils is carved from a single piece of jade. Distinguished by fish fin shaped
ornaments at the corners, the wide mouth reveals a filed front tooth and flint-like
tongue. The figure wears the headdress of the Quadripartite Monster, symbolized
by the stepped plaque with a central flint. The overall effect is an imposing
representation of the Mayan deity. (source:http://collectrium.com/)