Alien and Xtro:
Attack of the Block's Joe Cornish and Edgar Wright's
fascinating but blurred views on the alien suit performers

leading from
Alien echoes
and
Xtro


a) Misperceptions about Bolaji Badejo performing as the alien

Edgar Wright executive producer of "Attack The Block" talked on the commentary of the dvd with the director Joe Cornish briefly about Alien and Xtro.
They talked about how Bolaji Badejo during the making of the movie Alien had to wear the alien suit backwards so that the knees would be seen to be going the other way, and most likely this was the shot where Bolaji Badejo dressed in the suit was doing his crab walk in the scene where the alien is about to kill Lambert and Parker.
Badejo meanwhile had his suit on correctly but with his long limbs and small body appeared to be able to scuttle around on fours quite inhumanly.

b) Misperception about the wearer of the creature suit in Xtro
Joe Cornish talked about the alien suit performer in Xtro being someone who could walk on all fours upside down, like, like a back flip, and then they designed the suit around the person, doing an upside down back flip.
Although the performer could walk on all fours with his back to the ground, perhaps it was almost quite unremarkable other than to think performer could move around backward in the suit he was wearing at all effectively.
Admittedly, neither of the two had actually seen the film completely. 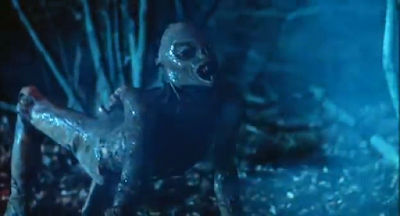 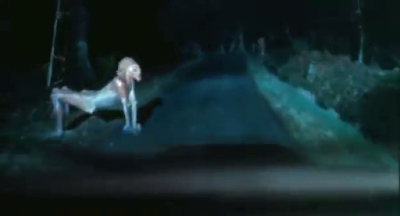