a) Another image association in Giger's painting Demon, this time associating it with Tolkien's cover for his book The Hobbit. A while back I had decided that Demon referenced a photo of Nigerian musician William Onyeabor as well as a demon from a Hieronymous Bosch painting, and the connection there was the similarity between the surname Onyeabor and the name Hieronymous Bosch 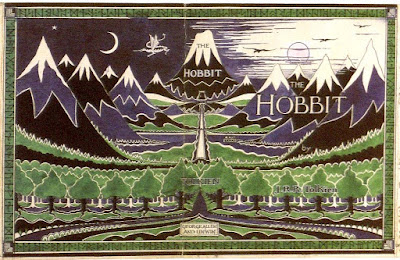 b) Around the 18th March 2017, my mind started linking Erebor and Onyeabor, after I had seen how Giger had incorporated an illustration from the Radio Times for the Lord of the Rings radio play.
Erebor was the name of the Lonely Mountain from The Hobbit, where Smaug the dragon was to be encountered in his Giger's N.Y. City XVI (1981)

c) So I'm understanding that Giger must have taken some of the details from this book cover, he incorporated the central path as a central line, and the door into the mountain in the painting as a nose and also the triangular division between the two lower eyes.

The slope of the mountains becomes the side mandibles with long claws on them.

Perhaps the moon and the sun become the eyes.