a) 26th March 2017, I'm looking through the Radio Times scans posted at Radio Times Collectors on Facebook. I suddenly notice the cover for Radio Times from 21st March to 1s April 1983, and perhaps a feeling of jollity about the image. It features a painted relief of Christ being crucified and the soldiers around his side. It's as if Giger has taken a good portion of the picture, reversed it and so in using it as reference, has Jesus head in the upper left with his right arm stretching around to the right.

b) The horizontal creases in the cloth that Jesus is wearing become the horizontal bands  to the middle right.

c) The soldier down to the right in the reversed chunk of the image, the bottom of his tunic transforms into the fingers down the the bottom left while the rest of his body transforms into an upward facing biomechanoid head, with a beam of light between his eye and the head that would be Jesus'. 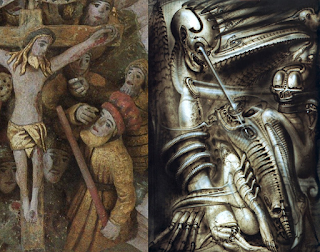 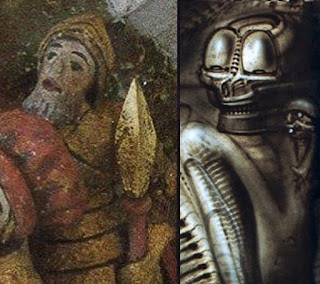