leading from
H R Giger's Art
and
HR Giger: The Passage Temple environment and
Details in "The Demon" by Jack Kirby and Giger's Passage Temple

a) Passage Temple Life references idol in double page spread from Jack Kirby's The Demon?
The wall that serves as a monorail has a break in the center which  opens up to show a zip and a penis filled with babies.

It becomes reminiscent of the horned head of the idol shown in The Demon by Jack Kirby, with a divide in the centre of the wide horns and a generalised phallic shape sticking out of the top of it.

b) References Ernst Fuch's Triumph of the Unicorn (started 1952)?

Giger takes the rupture in the side of the building and uses it in his own painting.

This other piece of architecture inside, Giger takes the central part and turns it into a phallus.

The bottom and sides of the piece of striped architecture become transformed into the zip.

The crisscrossing sticks become transformed into the suspenders worn by the lowest babies.

The woman's head becomes transformed into a Giger woman.

The line of ribbing beneath the curved wall floating in the air becomes transformed into the ribbing up the body of a biomechanic humanoid with a bald head.

d) Referenced in an illustration of the Celestial Arishem, leader of the fourth host from The Eternals vol 1 #2 (August 1976) by Jack Kirby? 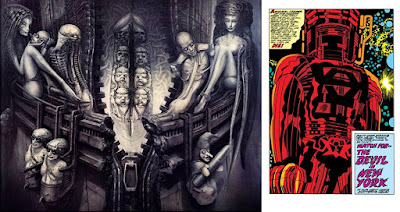