Leading from
The 1910s treasures of Satan Trail

a) A Battery Shelled by Wyndham Lewis. (1919)
A vorticist painting. The Vorticists were a British avant-garde group formed in London in 1914 with the aim of creating art that expressed the dynamism of the modern world, partly inspired by Cubism.

"The First World War, especially the Western Front, was dominated by artillery. Counter-battery work was essential in order to suppress enemy barrages and this painting illustrates the deadly effect of precise German bombardment. The three gunners in the foreground calmly observe the devastation before them; stylised figures struggle through the cratered landscape and distorted columns of smoke rise above the battery position. The serenity of the gunners in the face of immediate chaos reflects a fatalism and detachment perhaps derived from their distanced and impersonal mode of warfare. In style and content this painting was one of the most controversial to come out of the First World War." (http://www.iwm.org.uk/collections/item/object/16688) 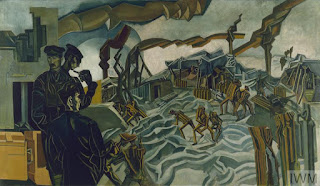 b) Treasures of Satan would have been roughly referenced for this, and the abstract shapes across the landscape at the middle to bottom would be loosely inspired by the bodies across Delville's work and the wall connecting with the middle of the painting from the left would be inspired by the shape of the top of the dark area on the left of Treasures of Satan. Tentacles of the Satanic being become trails of smoke in the sky in the background that seem like tendrils

c) Comparing the top of the dark area to what seems to be a wall half fallen over,
There's also a roof in the background that fits in with the position of the arm and the hand in this section of the image.

e) Meanwhile the three central figures would be in the space between the end of the tentacle to the right and the sleeping bodies, with the lower leg to the right of the Satan becoming the left figure.

f) So that would mean the doorway on the middle left in the background would be the space in between the Satan figure's legs, and the area of wall to the right of that doorway would be the upper leg.
Posted by wmmvrrvrrmm