leading from
The Henu Barque trail through the 20th century.
and
The 1920s "The Treasures of Satan" trail
and
Otto Dix 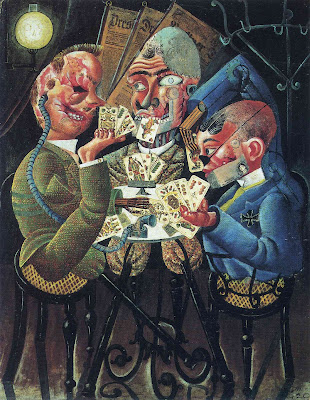 a) Otto Dix's painting Skat Players shows itself off as a work borrowing elements from at least one depiction of the Henu Barque, Delville's "Treasures of Satan" and also Dürer's "Jesus Among The Doctors"


d) Comparisons to the Henu Barque
Does Skat Players also reference the Sokar Funerary Barque from the Papyrus of Ani as well?

The two straps holding the barque down to the sledge become the centre man's peg legs, while the upper U shaped ends of the straps become the stumps.

The three planks that make up the frame supporting the barque become the chair legs, the white area becomes the table.

The three spoon like rudders three supports that hold the arm on the right chair.

At the top of the three central support frame, the ribbed structure going across become the newspapers.