a) Portrait of Elizabeth Shaw
When Matt Hatton drew this unused image of Shaw as David's icon, there was no real answer to whether she was alive or not.

There was no brief really apart from the fact David tortured her. Hatton thought that she would be the encapsulation of his love and hat for humanity and there was no way to really be sure of what was real and what was not.


b) Portrait of Elizabeth Shaw (2)
Hatton did another drawing of Shaw along this theme, and found himself slightly inspired by Giger's Li II, mainly in the eyes.


The first thing that Hatton did on the project was an Engineer Dissection, roughly in the style of Leonardo Da Vinci.

Then he did a female Engineer, but the drawing team were going in an anal-retentive Victorian style for the cross hatching, but decided it would be prohibitive in terms of the time that they had and the amount of work they had to do, and so this became a looser in the manner of Rembrandt style hatching

Matt was taking two Elizabeth-Shaw 'Immaculate Heart" religious/blasphemous studies to completion but in the end, he chose the profile version.

While he like Florentine drapery, with this forward image, he was showing an allusion to the Virgin Mary's hood/headdress and it was more in key with the idea of religious portraits of the Virgin Mary with her heart exposed.

In the end he preferred the idea of the fishbowl helmet representing the halo, and the engineer's spine in place of her own on the profile


d.ii) Matt said to the Set Decorator Victor "What's your decision?" and then the set decorator returned the words "What's YOUR decision?!"

In Matt's story of this event, he found himself putting his hand over his face covering his eyes, perhaps in exasperation.

The idea of turning a halo into a space helmet fits in with the Von Daniken/Ancient Astronaut mythos as on the cover of Gerhard R. Steinhäuser - Jesus Christ Heir to the Astronauts, 1976 (See: Prometheus: Jesus Christ Emissary From Outer Space?)

Perhaps HR Giger did this sort of thing in his Biomechanical Landscape (1976) near enough transforming a Nativity scene by Guido da Siena from the 1270s, but in a way that it was difficult to tell what they were for. (See: Biomechanic Landscape I ) 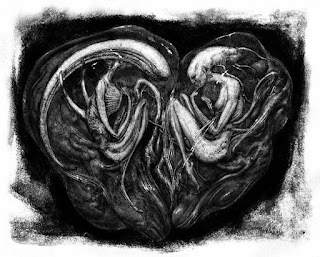 Matt went with the idea that David the android would investigate congenital and extreme abnormalities, perhaps in pursuit of finding more elastic/hardy qualities for the 'xenomorph' (although the skull  in the middle bottom of the image is a normal baby skull.

So there would be exploration of existing conditions such as hydrocephalus in babies in terms of rapid structural growth/expansion to allow for a bigger brainpan for example, or an ideal shape etc.

Matt explored the Beauchene Skull process which was an exploded skull, that was a disarticulated human skull that has been painstakingly reassembled on a stand with jointed, movable supports that allows for the moving and studying of the skull as a whole or each piece individually.

It was named after the mid-1800s French anatomist Claude Beauchene who was known to have developed this method to display the anatomy of the head. Beauchene would meticulously clean a skull, separate its bones, and mount them on a stand designed to exhibit them at once individually and in context.

A part of this process was to fill the skull with rice, saturate it so that it swelled and split the bone along the natural fault lines. It was a process attributed to the French but as Matt wondered, it may have originally from Leonardo Da Vinci. 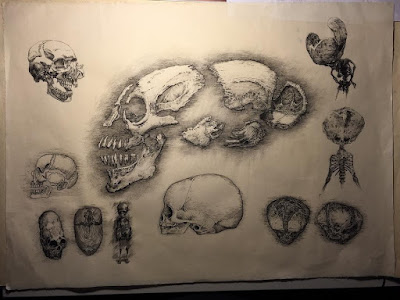 Matt produced an early version of a the alien foetus piece.

He thought that the dome of the skull might form a long sensory array or use different bandwidths for its vision.

He also liked the idea that the alien might would see thermally like a snake, seeing it as logical.

Going beyond the obvious dragon metaphors and beasts being afraid of fire, there was the idea that a flame thrower would temporarily blind it.

Rather than it being a head caught within a spiders web, these are radiating waves. 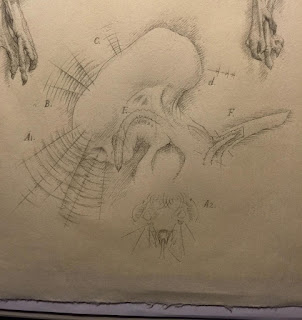 The drawings continue to go with the possibility that the images are based on David's work on the alien life form or are they his unhinged thoughts.

Is David with his increasingly fractured mind,  a reliable narrator or not? 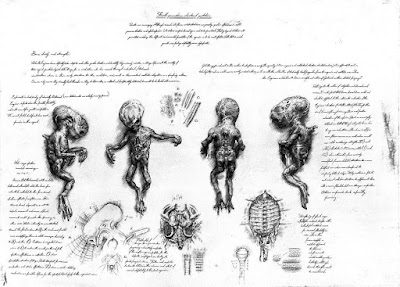