Grave Circle A, Mycenae, showing a duel between a sword-bearing and a spear-bearing warrior. CMS I 11,

(from a grave dating back to 16th BCE) 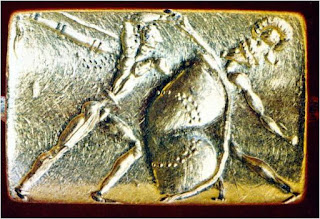 The question about how it might relate to the Henu Barque goes on.

The boat with the piles of sand looks as if it's tipped onto its left, but luckily for them the sand isn't falling off otherwise they would be in a mess.

However there are other ways to interpret connections between parts of the two.