a) After noticing a possible connection between Sylvain Despretz's organic skullship (see: Superman Lives: Sylvain despretz' skullship concept art: Further thought with Chris Foss' Dune Guild Merchant Ship) and the Guild Cargo Ship for Alejandro Jodorowsky's Dune done in 1975 by Chris Foss, I wondered how this picture by Foss fitted in with this idea of connections with the Henu Barque.


b) Realisation!
Back on October 3rd 2017, I had decided that the car rally scene from "Tintin and the Red Sea Sharks" (p62) was another illustration that used the Henu Barque configuration.

On November 25th 2017 looking through my collection of Henu Barque related images, I looked at the Tintin image and suddenly had thoughts about how to turn it into a spacecraft with the central stairway, the driveway becoming the centre line of the the ship, and various cars and other things in the image could become fused in with some vast structure to become various odd details.

I suddenly realised that this was what Chris Foss probably was doing anyway, since in the Alien production, I had noticed that some of his spaceship illustrations already borrowed elements from Tintin images that I believed were based on the Henu Barque configuration. 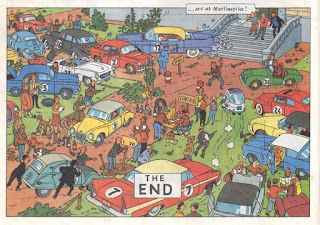 c) The mouth of the ship

The side pod with a gun on the front probably has evolved from the idea of any old car but in the picture there isn't a particular car in that place. 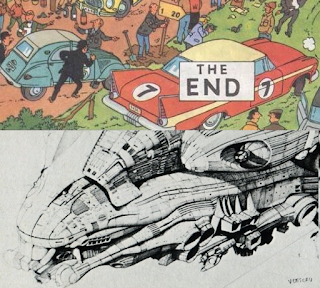 The table with people seated around it by the control sign become the cannon. 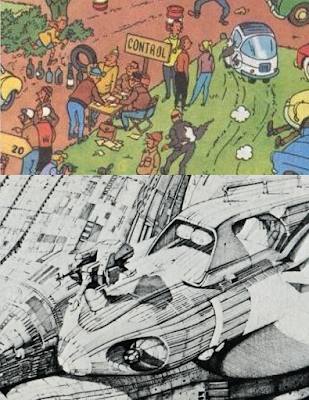 e) Details along the centre


Tintin, Captain Haddock and a third person as they stand on the front steps become three radars at the very top of the vessel. 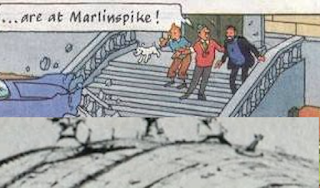 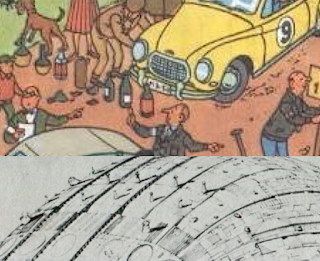