leading from
Alien: Covenant
and
Asterix The Gaul

a) Asterix and Alien Covenant

a.i) On the 13th of December 2017, looking at Asterix The Gaul stories, I'm looking for comparisons with aspects of Alien:Covenant, since I believe that Prometheus used the Tintin comic book stories as a spring board for ideas, and both these comic book series have been near enough like the spine of the collective consciousness around Europe over past decades.

a.ii) It probably wouldn't be so easy to claim that any of the characters were supposed to be specifically Asterix, Obelix or any one of the characters, but at time certain almost arguable similarities between characters might come to the surface

a.iii) Perhaps for a sequel to Covenant, I might almost wonder if they'd reference the Smurf comic books, but looking at the possibility of Disney taking over the Alien franchise, that might easy turn into Disney comics. 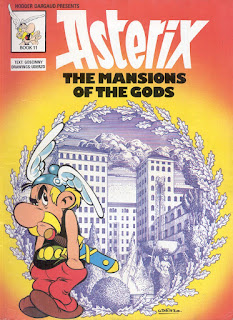 b) Asterix and The Mansion Of The Gods

b. i) First of all I find myself being drawn to looking at Asterix The Mansion Of The Gods, which presents a story about how Romans plan to build a city in place of the forests around the Gaul's village, but their plans are defeated.

b. ii) On one level, the Mansion of the Gods is the city like place built by the engineers and it's been there for aeons, but we have the Earthling like the ancient Romans, planning to build their settlement in the forests. 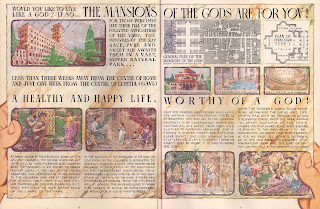 b. iii) In the book about the making of Alien Covenant, Ridley compared the crew and passengers of the Covenant to the Roman army, so there is some co-relation

b.iv)  Danny McBride as Tennessee as Obelix?
Perhaps the fleshy Danny McBride as Tennesee might be compared to the friendly and strong Obelix a menhir sculptor and delivery man who is Asterix the Gaul's best friend all the way through the comic book series.
b. v)  Billy Crudup as Oram as Squareonthehypotenus?
Looking at the character Squareonthehypotenus who was the architect of the Mansion of the Gods, a shy man with perhaps a great future ahead of him, but is seen to be a fairly unlikable authoritarian character as he just tries to get his work done and smooth over the disruptions.

Perhaps I might start loosely comparing him to unlikable Oram who decides to set up the colony on the planet and then comes to regret his decision, soon falling into David the android's trap.

b. vi) Michael Fassbender as David the Android as Cacofonix the Bard?
The Asterix story's Cacofonix the Bard turns out to be the Gauls' secret weapon for getting rid of the Roman residents, they get Squareonthehypotenus to let Cacofonix use an empty apartment in the Mansion of the Gods without letting realise what a terrible musician he is.  David the android reveals his abilities to sing and play the flute, thankfully much better than Cacofonix. 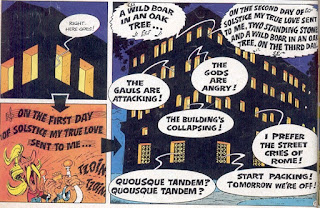 c) Death of the engineers compared to Asterix and the Black Gold
c. i) Looking at the book Asterix and the Black Gold, we are dealing with a story about oil and this might relate in some way to the black goo. I notice how into the story, a fountain of oil breaks out of the ground raining down on Asterix and Obelix. Perhaps this scene sparks of what to do about killing the Engineer colony with the black goo, and David lets it rain down on them from the Juggernaut spaceship.


c. ii) Insect sized cluster of spores compared to Asterix and the Black Gold
I started to notice a fly insect character that was a messenger drinking for a jar of honey, he would be loaded with words on paper like a carrier pigeon. 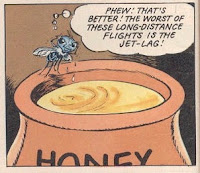 I wondered about life right down to insects being effected by the black goo.

This female fly would intelligently fly around its master. 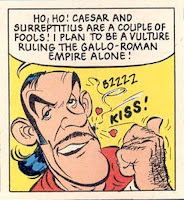 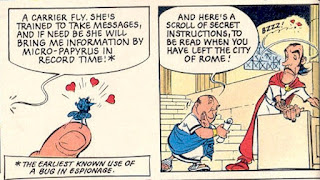 I began to think about the alien goo infecting life forms right down to the insect kingdom, but I'm looking for something that could be used as a part of the events in this Alien film. I begin to think about the intelligent spores coming from the puffball forming, which come together as a flying form that enters through Ledward's ear before penetrating the skin, and later also the character Hallett's nostrils , infected them with a neomorph that would grow inside the victim.


c. iii) Neomorphs compared to the boars as animals simply there to get the story going.
However at the beginning we run into a story about boars realising their role leading the Gauls to the Romans to result in a fight.


I'm starting to think about the manifestation of the Neomorphs, perhaps they are like the boars, and their role is simply to lead David the android to the humans in the story, although the encounter with them turns out to be deadly for the humans.


The surviving Neomorphs, once David has frightened it off and led the humans away, is forgotten about for the time being.

d) Landing platform compared to the magic carpet from Asterix and the Magic Carpet.

At the end of Covenant, they have a rescue scene involving a loading platform spacecraft that looks more or less like a mechanical flying carpet to me and a whole story "Asterix And The Magic Carpet" involves traveling around on magic carpets with all sorts of scenes of action ensuing.

e) Death of engineers by falling black good compared to Romans being roasted by a landing spaceship in Asterix and the Falling Sky, book 33

On October 18th 2018l I went back to the Asterix books and thumbed through the pages of "Asterix and the Falling Sky" published in 2005.  Part of the scenario shows an extra terrestrial invader in a rocketship lands in the Roman fort leaving the Romans cooked by the ship's thrusters. 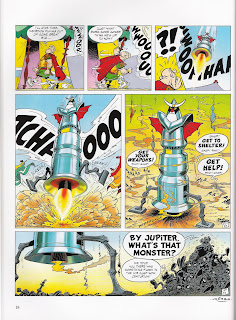 Coupling this with the scene showing Asterix and Obelix covered in black oil from "Asterix and the black oil" and the scene from the story "The Planet Once More" from Moebius "Edena" (See: Alien Covenant:: "The Planet Once More" from Moebius "Edena" inspires the discovery of the dead Engineers' city? ) where humanoid aliens are standing around in a state of cryogenic suspension or their mummified remains are to be found crouching elsewhere. The ideas merge together to echo the scene in which David bombs the engineer city with the black goo.