a) Incorporating Darth Vader's face
The Empire Strikes Back was released in 1980. Giger managed to see the movie when it came to the theatres in Zurich in Switzerland. Afterwards he painted New York City XVII and incorporated the face similar to that of Darth Vader at least twice, perhaps without having much of a clue of what he was painting, roughly making a phallic totem pole complete with testicles, one transformed into a face a man merging with another face that might be an imagined Vader's face unmasked since, since Giger has mentioned the presence of Vader in the painting, it bears features from the helmet above and around the side of the face on the side of a phallus seen from the side with testicles.


b) Chalice
At the bottom is a chalice which might as well be roughly a Darth Vader face all over again but with the features transformed beyond recognition. 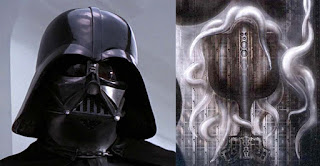 c) Mysterious dark figure
On the top of the right, there is a tall human figure seen from the side with a high collar, perhaps this is also Vader as glimpsed in his meditation chamber. One can recognise him as a biomechanoid and Giger's creativity has made him one of his own. 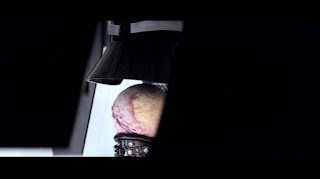 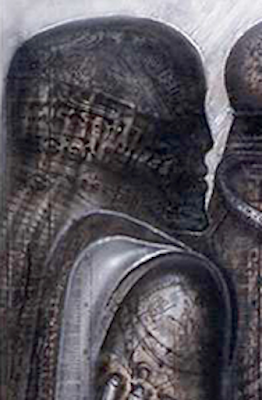