Leading from
The Henu Barque trail through the 20th century. 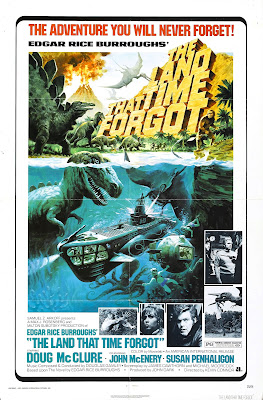 a) The Land That Time Forgot poster

This enjoyable poster for The Land That Time Forgot it enjoyably misleading.

There is no tyrannosaurus rex to be found in the lake, there isn't a giant manta ray to be seen firing some sort of death ray from an appendage at the front of the head, in fact there isn't any manta ray at all.

There also isn't a minisub in the film anywhere, and the main submarine does not have a row of windows at the front.

There isn't a giant octopus to be found in the film either.

It's as if the poster artist might as well be trying to sell this film off as an episode of Voyage To The Bottom Of the Sea.

April 25th 2018,  film writer Phil de Semlyen on Twitter was uttering words about "Jurassic World Falling Kingdom"’s opening sequence, stating "From what I’ve heard, it’s absolutely nuts. About time somebody combined submarines and dinosaurs" (https://twitter.com/NickdeSemlyen/status/989218283034415104) which brought me to start mentally merging dinosaurs and submarines together in a biomechanic manner but one Roger Crow suddenly posted a poster for "The Land That Time Forgot" and I thought, 'Hmm, Giger has seen this' and that it echoed elements from his Mordor painting series from that same year.  (Man thanks to Roger Crow: https://twitter.com/RogerCrow/status/989398407537184770) 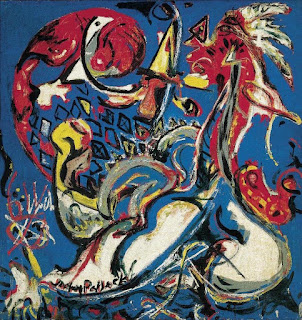 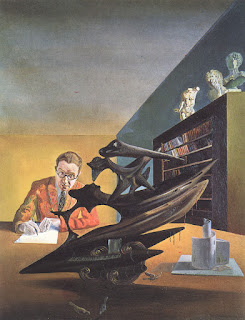 c. iii) See: References The cover of "Mickey Mouse and the Pirate Submarine" by Floyd Gottfredson (1939)? 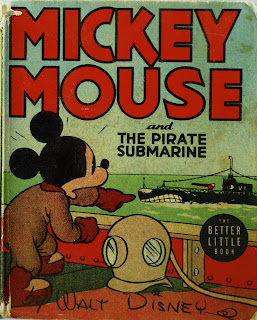 While this poster appears to reference Dali's Portrait of Emilio Terry, it also should be noted that in 1927, there was the Land That Time Forgot cover for Amazing Stories that was also part of this Henu Barque trail, but entering the trail as part of a succession of compositions stemming from Max Ernst's "Young Virgin Spanking the Infant Jesus In Front of Three Witnesses" from 1926 culminating in Dali's Portrait of Emilio Terry that was finished around 1930.

The magazine itself had some very notable cover illustrations of that time, but it might look as if somehow everyone was being informed about who was doing what.

Was someone writing a newsletter that got to both sides of the Atlantic and the artist of the film poster was another of those keen to continue the tradition ? 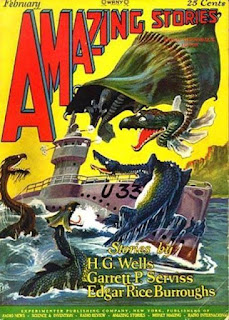 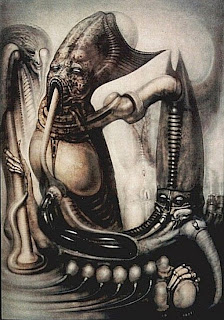