a) STONE ARCHITECTURE ON MARS, huntdown?
Storyboard and concept artist Andrew Currie a member of Richard Hoagland's Enterprise Mission Imaging team took note of the Sotheby's sale of the painting

Looking from a point of view that there might be some sort of secret perceptions and hidden information incorporated into the painting about discoveries that were not shared with the public.

Andrew looked at the images of the astronauts and found that he couldn't really say that they were ultimately human, and perhaps even they were a potentially different species.

He felt that they weren't just marvelling at the temple but they were agitated somehow and they seemed almost aggressive at least in their body language.

He could see how everyone might think in response "oh come on you're just talking about one man's fanciful painting".

Was it all speculation or was there something really there?

Perhaps this was a very strange painting to consider.

He presented his ideas on the radio show The Other Side of Midnight on May 12th 2018.

Andrew would come to write a description "There are three figures in this composition, what I call two hunters and the hunted. The latter lies slumped between the two pillars, its head blown open by an energy weapon. Notice the almost shaped eyes and the fallen alien being"

He noticed that the two astronauts had very peculiar helmets on and perceived the strange fallen alien to be an entity that might when standing up be eight to ten feet tall and also have an elongated skull.

Seeing how oddly the astronauts arms were positioned, exactly what was this weird little diorama about?


b)  Dispute: Ron Miller vs The Other Side of Midnight

We must also respect that Ron Miller, the author of the “Art of Chesley Bonestell” and the one-time administrator of the Bonestell archives has a different view.

He listened to "The Other Side of Midnight" radio show, felt the need to respond in internet comments, stating that he had seen the original painting , that the alien that Andrew Currie noticed wasn't there, and the same could be said about the details of the astronaut.

He understood that the structure was based on an existing acropolis being the ruins of the Temple of Zeus Olympus near Athens, from the time of Hadrian as mentioned in the book "The Exploration of Mars", and was indeed, as the picture's caption explained, to illustrate how the lesser gravity of Mars would effect architecture.

He felt certain that it was certainly never meant in any way to illustrate anything that actually exists on the planet Mars and to suggest otherwise would be patently dishonest.

However it seems evident to me that the difference between the photo provided of the Temple of Zeus Olympus near Athens, and the Martian ruins drawing gives me the idea that there was room for Chesley to have some fun and games exploring other directions.

However, if we were to look at the importance of Chesley Bonestell's art in the lives of science fiction fans and the ability people can have to look at the details and look at them from different points of view.

If we are going to acknowledge Ron Miller's point of view, as valid as it might be there, are other point of views to counter his own, that there might be something interesting to notice even if one can not have the last word on what anything is supposed to be.

I'm quite certain that people such as Ron Cobb who has been a great fan of Bonestell's art would have known about this painting, perhaps the oddities made its way into the mind of Dan O'Bannon and that HR Giger found out about it too when he worked on Alien.


The oddity of the astronauts helmet and the idea that there seemed to be a figure hidden in the painting might be something drawn from the painting after discussion.

It appears to me that the painting also looks as if it stirred ideas in Ralph McQuarrie's imagination when he painted a cantine scene featuring characters huddled at the base of pillars and characters such as a stormtrooper and a seated alien with complicated breathing equipment for Star Wars as displayed below, and perhaps the Garindan is another thing that takes some inspiration from the proboscis like shape on the front of the helmet. (See: Referenced in Ralph McQuarrie's Cantina illustration and the Garindan from Star Wars)

Perhaps they would have had access to better images than those seen in the books, perhaps a visit to a Chesley Bonestell exhibition.

The details of the figures in the book "The Explorations of Mars" are too pixelated to make anything from but still it looks near enough as if there are three characters, two standing and one sitting. 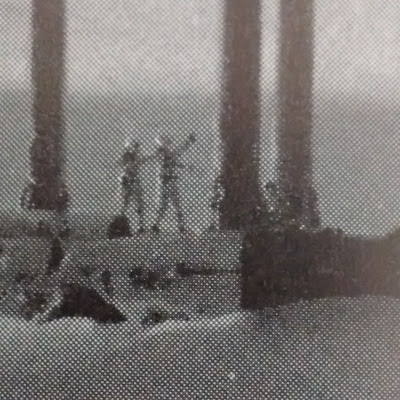