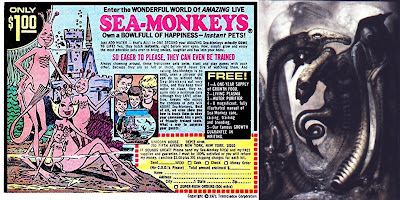 a.i) A number of the Mordor paintings look to me as if they incorporate ideas about mythical sea creatures such as sea monks, sea bishops, Nommo from the Dogon mythology, and perhaps it's like an underwater world, so on June 4th 2019, I decided to see if the Sea Monkeys which were brine shrimp that looked nothing like the creatures in the illustrations but would contribute to a modern mythological landscape in the comic reading public's mind, were part of this Mordor landscape.

a.ii) Relevant part of the illustration next to Giger's painting.

Should we be looking at the next version of the Sea-Monkeys illustration or both, by the same artist?

Does Giger's painting actually have the colours shown here or is it more monochromatic at the top of this page? 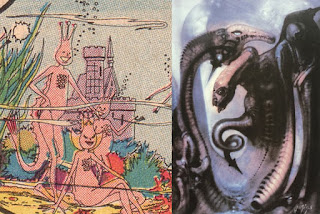 a.iii) The seat rear of the female sea-monkey becomes a bottom curve. Perhaps the head of the female becomes the loop in the tail. 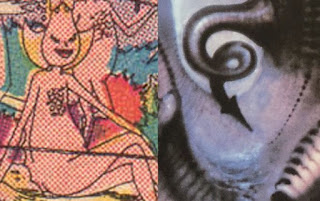 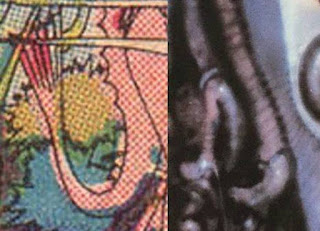 a.v) The sea-monkey man's smiling mouth becomes a pearl like glowing space, and the battlements of the tower become the teeth along the mouth of a long snout

a.vi) As said above, the bettlement becomes the mouth of the animal head with its row of teeth almost visible. The steeple perhaps becomes the slanting shadowy shape to the upper right 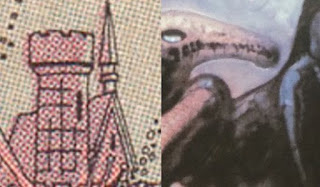 a.vii) The left leg and left side of the torso become the inner curve along a creature long ribbed body. 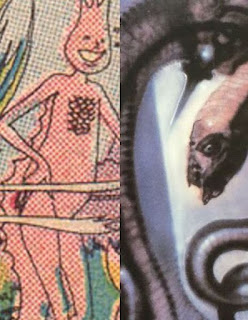 b) The later Sea Monkeys advert from around the following year.

Perhaps Giger would have had a copy of this to compare to the earlier version and play around with it in his painting, but at the moment, I don't have any specific ideas about what sort of difference it would have made, but despite the changes Giger could have simply used this image to the same effect in his painting or even more so. 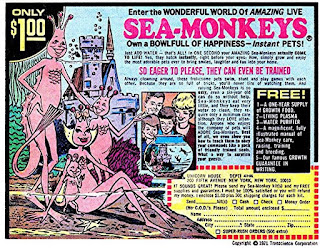