a) Here we have an untitled drawing by Sergei Eisenstein from 7th April 1931. It appears to show a man having sex with a horned beast such as an antelope, and I came to decide that the drawing referenced Salvador Dali's the Great Masturbator done in 1929, as seen further down

c) This downward bump in Dali's soft architecture becomes the horned animal's leg, held by the human's hand and in an almost similar way Vincenzo creates a "triple jointed" leg, but here it's not a foreleg. His final creature has bird like legs rather than like an animal with cloven feet.

d) The back part of the Great Masturbatar's eyebrow becomes a wing like shape, and in Eisenstein's drawing becomes the back of an armpit, and this seems to translate in Vincenzo's drawing as the top of the creature's skull. 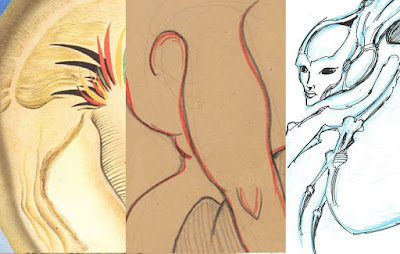