Alien: Development of attack by the alien beast via "Return of the Pink Panther"?

leading from
Alien: Development by way of the Pink Panther movies?
a) In "Return of the Pink Panther" (1975), Clouseau would regularly be sneaked up upon and attacked by his manservant Cato as a form of duelling, I suppose so that Clouseau can practice his self defense.

I think this crossed over into the Alien script as the idea of the alien beast attacking the Snark crew members. ?

In one incident, they find that it has raided the food store room. .

In the Pink Panther movie, Inspector Clouseau opens the door of his refrigerator also used for storing food and finds Cato hiding inside waiting to strangle him before they throw themselves around practising their martial arts.

b) Ridley Scott's storyboard for the alien beast sneaking up on a Nostromo crewmember. It's not really the same scene, but something to suggest near enough. 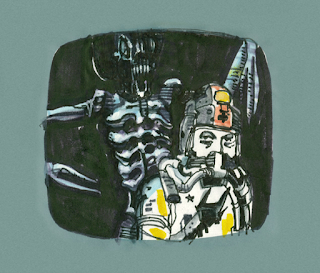