b) 4th December 2016, I thought about the possibility that in Giger's Egg Silo exterior painting, there were elements of covers from barbarian fantasy novels such as Conan absorbed into the painting amongst the petrified forms. I took a look at the various covers that would have been available in the 1970s and suddenly came by the painting Man Ape by Frank Frazetta, I realised that this was another painting that Giger would have been inspired by, it's one of Frazetta's best.


c)  I took a look at Giger's paintings and then settled on the idea that it could somehow be part of Mordor IV, I couldn't automatically see beyond my abstract sense of association until I thought about the upper red glow on Conan and the upper part of the red cape in the air and thought about how it generally reminded me of the female uterus and cervix and in Giger's painting, there was the lower part of a woman's body receiving a long phallic flute between her legs as if we seeing a cross section of her insides. 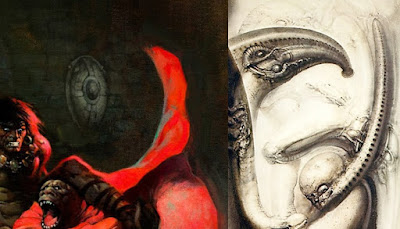 d) It began to unfold in my mind that the head of the ape became the head with the long flute like baguette like form with holes and the curved upper part of this cape itself becomes the long protuberance penetrating the woman, and so the ape's leg become the clawed animal limb below.

e) Meanwhile Conan's arm to the left generally becomes one of the legs of the female body part.

e) One might also have the idea that the upper part of the cape was turned around and transformed into curve across the woman's lower torso connecting the upper legs. Perhaps the indentation between Conan's shoulder and his raised need become the vagina. With that the shield in the distance becomes the head with the baguette like flute

g) The shield in the background appears to become the aqualung pipes. 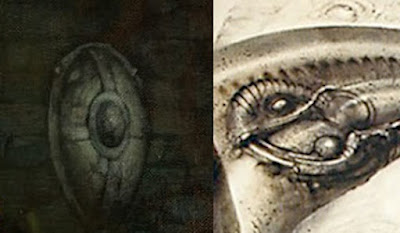 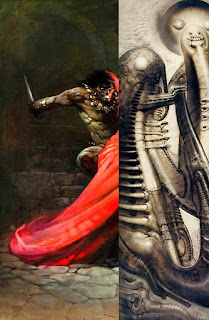 j) The shield also perhaps becomes the eyes of the floating head associated with the sun at the top and the single eye of the left figure. Perhaps Conan's arm holding the knife transforms into the far left figure's arm although reversed.