Alien: Evolution of the Alien script via the James Bond film "Diamonds Are Forever"?

leading from
Alien: Early Development of the Alien Script
and
Alien : Jewel associations

a) Space Jockey chamber
James bond finds a facility where Blofeld lookalikes are being created. and there he finds a man in a bath of mud, who's face is covered in mud and for Alien he becomes the "Space Jockey"

b)  Blofeld's cat and Ship's cat
Blofeld has a cat, or as it turns out in the film the various Blofelds each have cats.
Of course cats turn up in numerous films for all sorts of reasons
As it goes Blofeld has transformed beyond recognition since his previous appearance in a Bond movie and here has been transforming other people into himself.
Is that part of the alien's plan too? 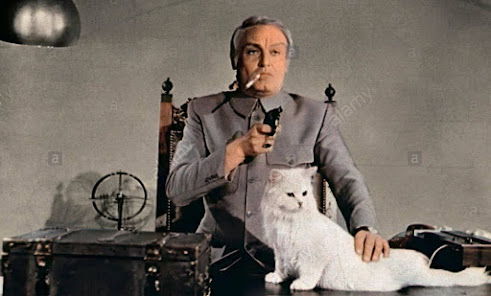 c.i) Diamonds smuggled in a corpse leads to the alien smuggled in a human
James Bond kills Peter Franks the diamond smuggler, and decided to smuggle the diamonds inside his corpse to get them from Amsterdam to Las Vegas where the body is soon cremated and James Bond received a funeral urn full of diamonds. 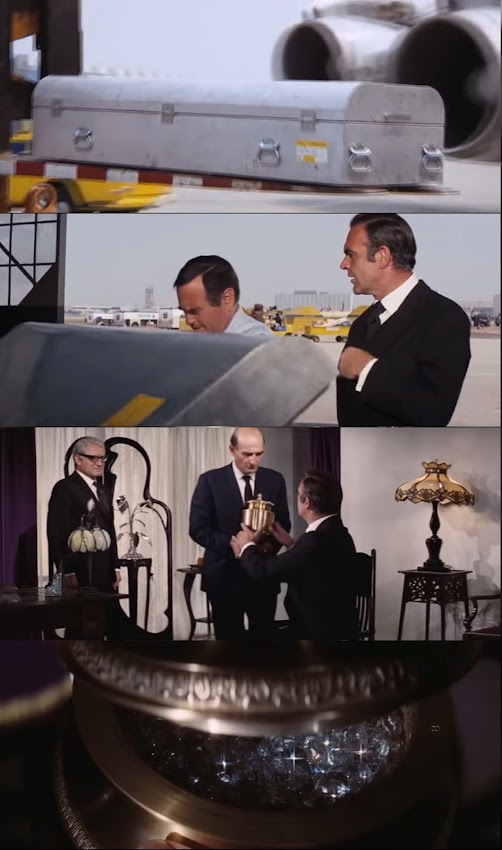 c.ii) Birth Temple Environment
The diamonds here become the alien hiding in the human as the chestburster soon to unleash itself
So the Ken Adam design for Slumber Inc. crematorium chapel might have been one of the numerous things absorbed into Ron Cobb's birth chamber design, as if the big diamond chaped stained glass window would be the space for the life cycle frieze.
Perhaps the design filled in for the lack of the interior of the House of Diamonds jewellry shop which featured in the original novel. 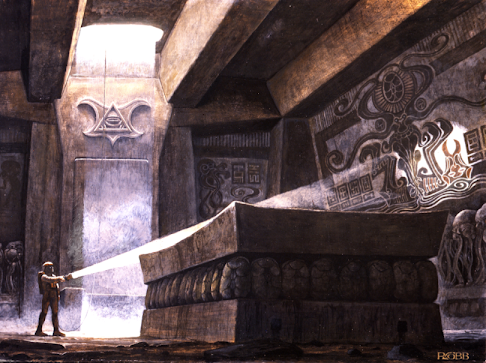 d) Cuddly dog toy in the locker leads to cat in the locker?
In the story, the diamonds that had been carried in the dead body turned out to be fakes and so the real diamonds are recovered hidden hidden inside a soft toy dog.
A baggage man comes to collect it from a locker to hand over to a man in a car who then drives off
Perhaps the idea of the dog toy being taken out of a locker would be used in the scene where aboard the Nostromo, the crew look in the locker for the chest burster but find the ship's cat Jonesy.

e) Murderous hitmen on the loose become The Alien beast
The hitmen Wint and Kidd killing everyone associated with the diamond smuggling ring, and anyone getting in the way of Blofeld, become the alien beast picking off all but one of the Nostromo's crew.

f) Alien in the Shaft scene
Bond is drugged and sealed up in a pipeline, soon to be chased by a Smart PIG (Pipeline Inspection Gauge)
Perhaps this scene might have set off the idea of the idea of the encounter with the  alien beast in the airshafts

g) The Narcissus Scene
When Bond and his helper Tiffany are on a cruise ship to Britain, thinking that they're safe, Wint and Kidd posing as room-service stewards try to kill them , by strangling Bond and burning him with flaming skewers, with a bomb aboard the trolley,
But Bond and Tiffany manage to kill them, with Kidd catching fire as he goes overboard and Wint is thrown off with the bomb attached by Bond.