leading from
Prometheus: Props
a.i) This is one of the tablets from the Sci-Fi adventure Prometheus. The tablets are gathered as evidence to prove that the Ancient Aliens, known as Engineers existed. It is observed most notably in the scene where Dr Shaw (Noomi Rapace) and Dr Holloway (Logan Marshall-Green) are briefing the crew on the reason why the tablets will lead them to find proof of Ancient life on planet LV-223.
The tablet has a flat base and is oval in shape at the top. The images depicted on it include the star map which is analysed during the film. This rather large prop is hollow, made of hard plastic and has a resin skin on the outside which has been carved and painted to resemble a dark grey stone effect. The bottom of the tablet has been given slightly broken effect which gives the impression that it was part of a larger rock at some point. Underneath a green painted pole is inserted into the tablet, which would have been edited out to give it a suspended appearance in the holograms. 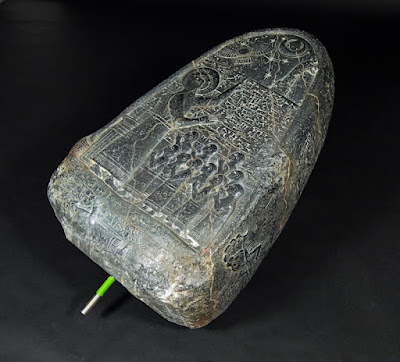 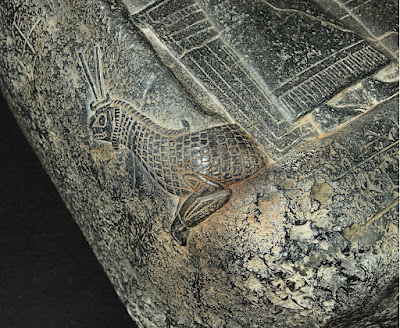 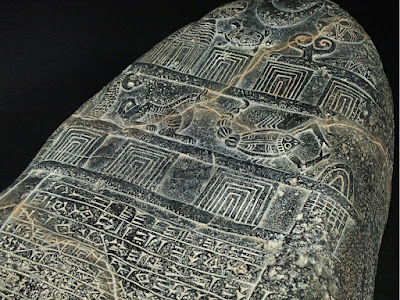 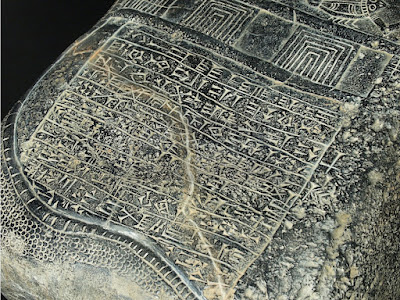 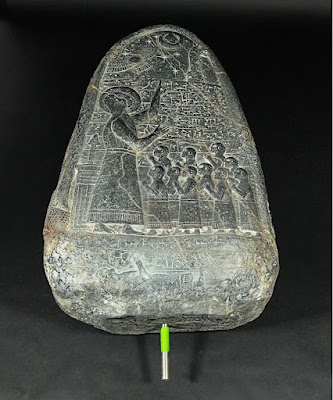 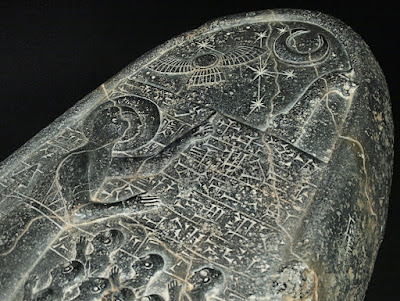 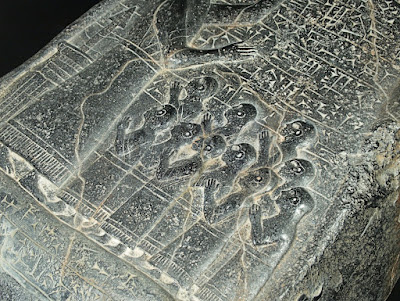 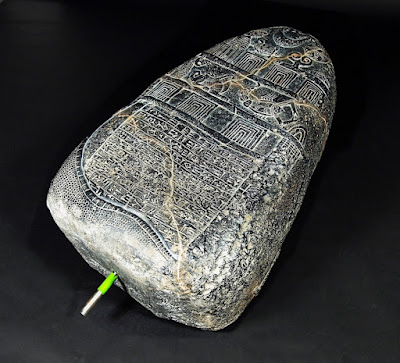 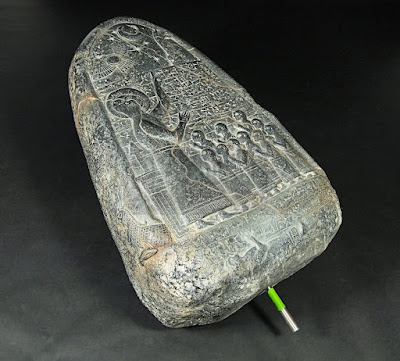 b) Babylonian starmap as it appears in the film 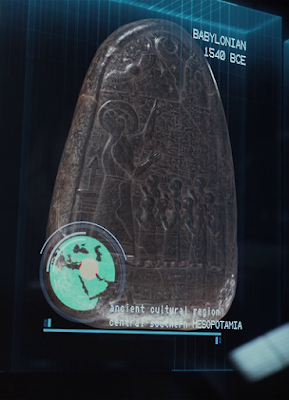 c) The front is loosely based upon a Babylonian stela found at the British Museum, (c.a. 900BC-800BC)? Most noticeably, with the addition of the star-map, the figures have been altered so that there are nine figures giving praise to the tall figure that tha on

"Commemorative stone stela in the form of a boundary-stone (kudurru): the stela consists of a small boulder, on one face of which a fiat panel has been sunk, leaving figures and symbols standing out within it in low relief. The greater part of the inscription has been carved upon the flat surface of the panel, but the last seven lines extend below the panel to the base of the stone. The stela is set up in honour of Adad-etir, the dagger-bearer of Marduk, by his eldest son. The name Marduk-balatsu-ikbi, which occurs in l. 4, is that of Adad-etir's son, not the name of the king to whom Adad-etir owed allegiance; and the two figures standing on the lower ledge of the panel represent Adad-etir and his eldest son, not Adad-etir and the king. The stele is closely related to a kudurru, since it is protected by carved symbols and by the addition of imprecatory clauses to the text. These symbols include (1) winged solar disc; (2) crescent; and (3) lion-headed mace upon a pedestal." (https://www.britishmuseum.org/collection/object/W_1881-0428-1084) 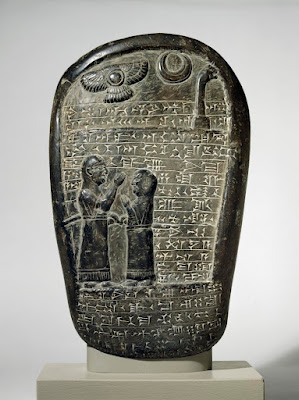 d) The back is based on a boundary stone, or kudurru, records a gift of land made by Eanna-shum-iddina:

"Limestone kudurru or boundary stone: consisting of a boulder of dark limestone, the faces of which have been slightly flattened by rubbing in order to take inscriptions and sculptures in relief. The stone tapers rather more towards the top than towards the base. The upper portion of the Obverse, for a space of 9 1/4 in., and the right side and part of the left side of the stone, are engraved in low relief with a series of emblems, the greater number of which are arranged within two registers separated by plain bands. Faces A and B, Upper register, (1) Solar disc, (2) Crescent, (3) Eight-pointed star, (4) Horned headdress upon a shrine, (5) Horned headdress upon a shrine, (6) Turtle upon a shrine, (7) Twin spirals upon a shrine (the spirals here curl inward and spring from a stem, thus presenting striking differences from the so-called inverted yoke), (8) Wedge upon a shrine (the thicker end of the wedge is here indented, and its face is ornamented with a decorative band), and (9) Spear-head upon a shrine; Lower register, (10) Lightning-fork upon a shrine, (11) Lamp upon a shrine, (12) Yoke upon a shrine, (13) Scorpion upon a shrine, (14) Dog upon a shrine, (15) Lion-headed mace a upon a shrine; below the second register on Face B, (16) Sheaf of corn upon a shrine; Left side and top of stone, (17) Serpent. The emblems in the Lower register are separated from the shrines on which they rest by a plain band. Below twin spirals, wedge upon a shrine and spear upon a shrine in the Upper register the engraver has left a similar band, but there he has cut it into sections, each of which forms a base for an emblem or a heavy cornice for its shrine. The lower part of the Obverse and the whole of the Reverse are devoted to the text, which records a deed of a gift recording a grant of five 'gur' of corn-land, in the district of Edina in Southern Babylonia, to Gula-eresh by Eanna-shum-iddina, governor of the Sea-Land. The estate is described as bounded by Bit-Iddiatu, the estate of Amel-Marduk, the province of the Sea-Land, and the Edina-Canal. The surveyor was Amurru-bel-zeri, and the transfer was completed by Zakiru and Adad-shum-ibni, two high officials.(https://www.britishmuseum.org/collection/object/W_1907-1014-1)