a) The name"Mordor"
The Mordor Series. Giger named this series of paintings after a dark hellish land featured in the fantasy novel, Lord Of The Rings simply because he liked the name.

I have only managed to take a look at a few of these in any sort of depths.

Then I noticed that there are twelve paintings which is an interesting number in terms of horology, with twelve hours on a clock, twelve months of a year, although these were not painted all within the same year.  Meanwhile VIII to XI of the series are still to be publicly seen.

b)  The Mordor paintings

c) Relationships between imagery of the paintings

c.i) Fisher Price Music Box Teaching Clock
On 12th August 2016, I started looking at further Fisher Price toys that might have inspired HR Giger, and suddenly came by the Fisher Price Music Box Teaching Clock for children which I would have known well myself as a brilliantly designed compact item. It has a moon and a sun face on it, as well as a pendulum image. Of course in somewhere like Switzerland there would be plenty of clocks to be found, but something such as the Fisher Price toy would have been referenced in the works Mordor IV onwards. At present, amongst the Mordor series, I have only explored its connection with Mordor IV and Mordor V 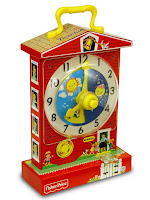 c. ii) Transforming buttocks shaped form
Numbers IV, V and VI show relationship through ideas, a vague face with goggle ideas in IV, transforms into a horned head with a buttocks face in V and then the buttocks appear in VI as lower part of a woman's body being penetrated from behind (and here it interelates with a heart shape space from a Dali painting), and above a face on the back of a woman's dress with horns. They also had a black pudding like thing common to the three with string tied around it sliding into anuses and other orifices etcetera.

d. iii) Merpeople
Meanwhile IV and VI might contain suggestions of sea lion like bodies. Perhaps Giger intended to have a sort of a mermaid in IV and showed a suggestion of a mermaid's purse in V while the two other entities in this painting both bear signs of being like amphibious creatures of myth, the sea-monk and sea bishop. Sea bishops that are such things as dried up stingrays adorned Giger's walls at home. III contains suggestions of the Sea-Monkeys illustration for adverts seen in comic book, which were in fact brine shrimp, but the illustrations were intent on shoving the idea that people were to receive in packet form a species of minute mer-people .

d. iv) Nommo
A continuation of the exploration of Merpeople myths, IV and V both contain entities that are impressions Dogon petroglyphs representing the amphibious Nommo of their legends, supposedly extraterrestrials from Sirius, which back in the 70s was an interesting subject of discussion for people interested in mythology and mysteries

d. v) Squid like form
However V contains a suggestion of a squid form going across the upper part with its tentacles to the left and VI has a squid like form in a same place with its tentacle wrapped around the throat of the main face in the painting that may well be the transformed clock hand

d. vi) Black pudding wrapped in string
Then it seems that I and III, feature a cutaway dark space on the right which features a long figure inside space. In V there is a central orifice from which a black pudding sausage is sliding out from and in VI, there is a similar orifice as a mouth with a hanging tentacle for the main face. Perhaps inspired by the Egyptian hieroglyph imagery representing Cobras.

d. vii) Human in a cutout space
Meanwhile Mordor I contains a humanoid in a dark cut out space on the left, he reappears in Mordor III in the same place and then again in IV as a flautist on one leg, and above him are the parted legs of a woman receiving the flute as a phallus and so the cutaway ridge above the character has turned into her parted legs.

d. viii) Intersecting head
III and VI both have a small head of some sort eclipsing a larger head,

d.ix)  Phantoms of the Pink Panther
The year they were done appears to be year also that the Jodorowsky's Dune was going into production before it suddenly fell apart, but it looks as if he was being inspired by what was going on in the production art. Perhaps he was being shown various images and told something about what the artists were doing and drawing ideas from, he found out about the Pink Panther comic book covers from around that time that all were reinterpretations of certain paintings and drawing that might have been useful for inspiration, and with that he would have been able to see how Chris Foss and Moebius working on concept art for the film were re-interpreting elements from these covers and other bits of reference material before finding ways to add something into his paintings.

d.x) Blast Off
Illustration from Linda C. Cain and Susan Rosenbaum's "Blast Off" (1973) by Leo and Diane Dillon appear to have been referenced along with the artworks that they referenced in each of the known Mordor illustrations. This was a short children's story about a young black girl who had fantasy of becoming an astronaut to the point where she becomes lost in her fantasy. The drawings were elegant and simple, and had enough of a dream like quality. The artists appeared to have James Gleeson, Frank Frazetta and old religious paintings in the back of their mind.