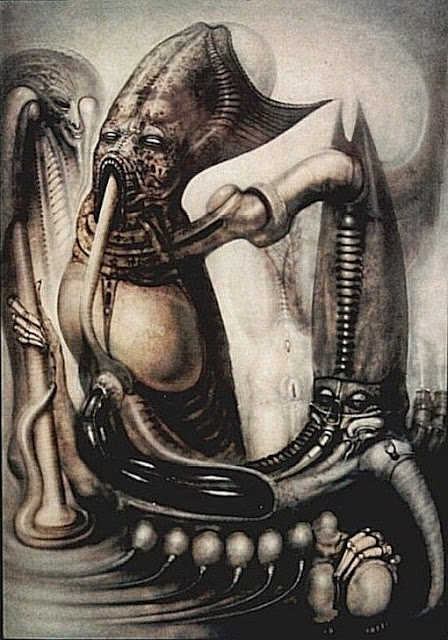 Interlinking structure of Gleeson's The Nerve Garden,  clockhand tentacle wraps its tentacle around the throat of the Nommo Manifestation as a Sea Monk transformed into a woman's dress and sea bishop turning into Kubin's The Brood who penetrates the woman's behind with a black sausage inspired by ancient Egyptian depictions of a cobra doubling as a pneumatic tube capsule

The painting borrows a buttocks formation from Mordor V and transforms it into a woman's elegant behind, it borrows the dark sausage like formation that travels out of the Bishop's squid like body and into the behind of the woman. It borrows the horns of the buttocks face from that painting and inserts one into the side of the head at the top, It borrows the central orifice from which a sausage is either falling or entering and makes it into the mouth of that face. Is the being with a mitre on its head a Bishop Fish?

b) 28th January 2016
The two main figures are two various of Giger interpretations of Nommo although is a mutant humanoid wearing a bishops hat, perhaps the body is also inspired by a seal and the other is a monstrous face with fins perhaps with a tentacle around its throat being constricted.

c) 25th January 2016
I thought about how this semi humanoid with a bishop holding a staff hat loosely resembled a seal form but perhaps might also be inspired by another animal with a longish body. I noticed that there were a row of teet cups and so assumed this was about an animal. I wondered for a while it was a pig and then I decided to take a look at Kubin's work and found The Brood, and noticed that Giger had borrowed from Alfred Kubin's The Brood and transformed all the kittens into milk suction devices, and replaces the cats head and elongated neck with a bishops hat

d) See: The Sea Bishop and the Sea Monk

f) 12th August 2016: Fisher Price Music Box Teacher Clock
I have decided, having noticed in some of the Mordor series some months ago, an unspecific element connecting with the idea of horology, and heavenly bodies travelling around the clockface, I suddenly realised that it ought to be due to Giger must have had an interest in the Fisher Price Music Box Teaching Clock.

While still referencing the Gleeson painting mentioned above, aspects of the bodily positions of the reclining sea bishop would become as the hands on the clock, and so the clock hand at the top had turned into squid tentacle in Mordor V and the tentacle turns up again wrapping around the standing amphibious sea monk. Perhaps the wooden gate has turned into the fingers of the sea bishop. A part of the handle turns into the sea monk's visible horn 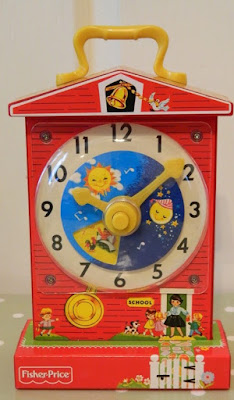 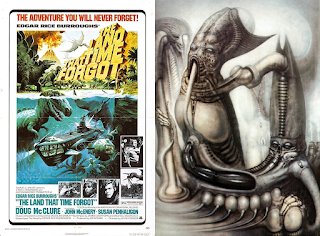 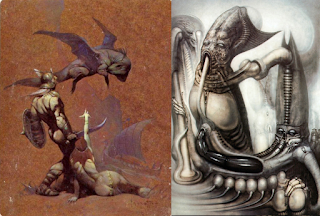