a) Further questions about the Golem
On 17th August 2015 , after coming to terms with how Mordor VII appeared to be inspired by the drawing "At the master's grave" by Hugo Steiner Prag for Gustave Meyrink's "The Golem", I decided to take another look at some of Giger's other paintings to think whether another Hugo Steiner Prag might have made its way into a painting, and then I wondered again about Necronom IV (1976), was there another secret behind the composition, what Giger was putting on the canvas as the original form. 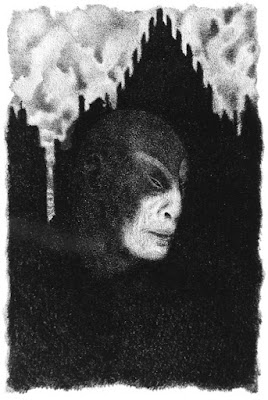 b) Thoughts about Necronom as a golem?
I wondered perhaps in essence it was a golem type figure, perhaps this thought had been floating around since the moment I asked about Mordor VII being inspired by a golem drawing and if so, it would be merged and distored with all these other concepts such as the Ernst Fuchs Angel of Death, Dali's Nefertit, the Wadjet and the Was-Scepter, etcetera, indeed a whole family of associations and then and of course considering the Wadjet was an eye and a brow, I wondered about whether Necronom VI also was partially inspired by a high contrast photo like image of someone's face with a brow and cheek in the light. 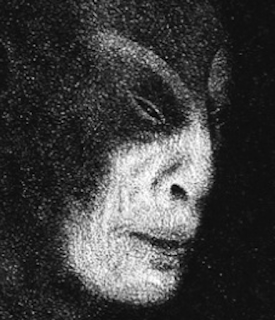 c) The face of the Golem
On the 18th I went back to Hugo Steiner Prag's Golem drawings and looked at the first one and thought, well that seemed to be the sort of thing I was thinking about, with the bow like brow extending across, and then the brow on the other side might even be the the end of the tail, and the nose transforms into the alien head. The small slitty eye is incorporated into dip in the pipes in the side of the head.