a) The elongated head of the humanoid in a motorcyclist's riding position and the contraption that it is riding incorporates the shape of the upper tusk like protrusions of Xibalba's U shaped jaw that appear to form a container. An entity inspired by the form of a Egyptian Henu Barque is attached to the back of the rider, has a tube extending from the side of the head hanging down reminiscent of the platted hair trailing behind the Pakal Votan’s head whose hair bunched up at the back has been transformed into into a single horn like protrusion hanging down extending from the back of the entity’s skull. The nose jewelry worn by Pakal appears to have transformed into the tongue of the head that the rider is facing in Giger's painting 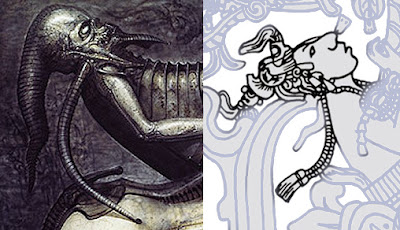 b) Did the tasseled platted hair coming down behind Pakal's back transform into the tubes hanging down from the sides of the entity from Giger's painting.  Did the head dress extending from the top of Pakal's head transform into the  horn  or striped sleeping cap hanging down behind its skull? This entity from  Giger's painting if it was inspired by the Henu Barque from Ancient Egypt would have a horn like protrusion at the back of the head since the Henu Barque had an antelope's skull at it's prow.

For the Henu Barque see: Evolution of the space jockey from the Egyptian Book of the Dead

c) Did the hem of Pakal's kilt inspire the line where the material begins to cover the riders legs as if in reverse? And did the semi oval shape that is part of the seat like area inspire the position where the garter is placed on the upper part of the leg in the Giger picture? 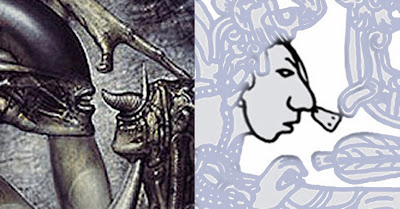 d) Was the tongue near to the face of the eyeless biomechanoid inspired by nose jewelry? Did the line coming down before Pakal's nose inspired Giger to turn the face into an eyeless visor ?

e) Did the tusk of Xebulba becomes the curved elongated head when merged with Pahal's face. Did the object touching Pakal's upper hand inspired the straps decorating the tusk breasts protruding from the front of the rider's ribcage?

f) Did the lower tusk of Xebulba transform into the strange long worm like device ending with handles bars coming from out of the side,  that at the front had one head growing out from the top of another head, upon which the rider is seated as if it were a motorbike?