Alien: The biomechanoid that O'Bannon wanted ?

a) Mystery of O'Bannon's original chosen biomechanoid
Instead of Ron Cobb's earlier design for an alien creature that resembled a sort of an oversized lobster, Dan O'Bannon had a vision of Giger's alien creature in mind for the monster right from the beginning as he sat on Ron Shusett's sofa.
He would describe a Giger painting but exactly which one it was is not easy to say.
Describing a such a painting at first glance can be very hard indeed and through words one might only convey vague impressions.
Which one he was talking about?
He describes it has having a head distortion towards the front.


b) Not going to O'Bannon's plan
When Ridley took a look at Giger's Necronomicon and found a different source of inspiration, namely the huge phallic demon in Giger's painting Necronom IV and it had the distortion towards the back, as we see in the final creature.
Dan O'Bannon's intended one had the distortion of the human head body coming out to the front as if to say he would have have preferred the back pipes coming out of the front of the chest.
However he felt that it was best to leave it to the director to go his own way with the movie.
Was there something really specific that Dan wanted as a the alien that he wasn't really to worried about as long as it was something near.


e) Issue resolves itself
As Giger got to work on adapting, designing and shaping the creature, without Dan having to direct him down any particular direction.
Almost by coincidence it got to a point where Dan was very surprised by the results and he thought to himself "you know, it's amazing. Damn it, it's even similar to the one I've been thinking of. "
Still if Dan had been directing, he would have wished to have Giger do something to break up what seemed too much like a human silhouette a little more, give the thing six legs instead of two or something like that.


d) A Giger Necronom that inspired Dan
Having recently explored Giger's painting Necronom IX (See Exploration of Necronom IX), on the 7th of July, 2015, a brief discussion about O'Bannon's early sketch for the monstrous alien in its third stage as seen in Rocket Blast Comicollector 148 and Phobos #1 came to the surface at Charles Lippincott's Facebook page since he provided a link for an article at monsterlegacy.wordpress.com.
Diane O'Bannon, the widow of Dan O'Bannon couldn't be certain about whether Dan had drawn the alien drawing attributed to Dan having no knowledge of its background.

Then it suddenly hit me that Dan had been inspired by Necronom IX and after the full drawing was shown in an article about the documentary "Memory - The Origin of Alien" in January 2019,  I realised a connection with a character from  Giger's Passage Temple Life (1974) 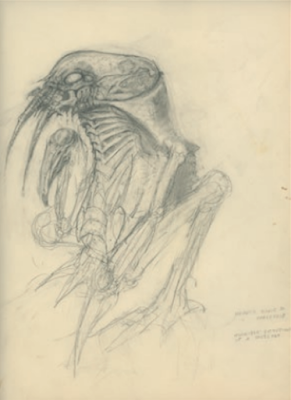