a) Dan adapts ideas from Necronom IX
It is complicated to point out exactly what Dan had done but he had adapted certain details for his own alien drawing. Should there be more of the drawing that might help to put the image into perspective, and perhaps a detailed scan might help to show more?

He took the eye like forms, transformed the shadow behind the ears into a sort of a collar.

The exposed bones of the arm for hand holding the ribbed phallus transformed into pincers and the tip of one of the bulbous forms in the lower half of the picture has become the joint to which what looks like a pincer connects.

The upper ridge of the open nasal cavity to the far left becomes a raised spike sticking out from where the nose of the creature might be if it had one.

The ears became the exposed almost decomposing areas on the back of the skull just as the place where the insect limb sticking out of the Necronom's head has as well. 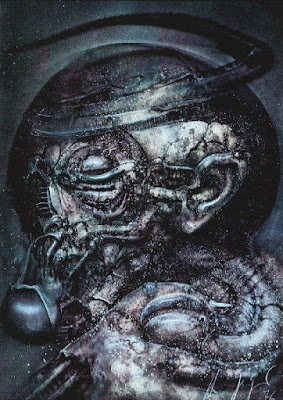 b.) Early Alien Beast drawing released with "Memory -The Origins of Alien"documentary

(b.i) Design also references a limbless character from HR Giger's Passage Life Temple (1974).
As soon as the alien beast was viewable as a whole drawing on page with the release of the documentary "Memory -The Origins of Alien" , there were more possibilities  and on 31st of Jnauary 2019 I had another idea.

b.ii) A Biomechanoid character as seen in the painting. He is to be found on the left  side of the actual painting 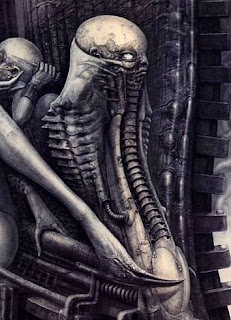 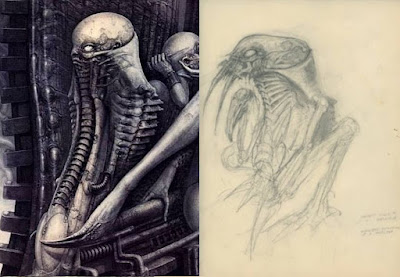