Echoes of Giger in Cronenberg's mugwump from Naked Lunch

a) Intentions for the mugwump
In 1991, David Cronenberg released his movie Naked Lunch based on William Burrough's book. One of the strange things from this movie was the creature called The Mugwump, designed by Stephan Dupuis. It was a creature only roughly described in William Burroughs novel, but Cronenberg intention was to make the entities look like a junkie’s body, and more humanoid than the creature described in the book. Indeed, he went as far as to decide that they should be based on William Burroughs himself, that it should look like him, have something about him in his face, chest and posture. Cronenberg’s Mugwumps were extra-terrestrials from Venus and appeared much more benevolent than the creatures in Burrough’s book. Here they had blue eyes, and were guiding Bill Lee’s writing ability. they were much bigger creatures.

b) Burroughs  Mugwumps
The descriptions of Burrough's mugwump's suggest something much more related to a roughly long faced humanoid creatures but with a beak of black bone and a mouth of purple penis flesh, skin like a junky and insect black eyes. One thing to note is that there hadn't been any clear attempts at drawing these creatures made available to the public until the Naked Lunch film's artwork came out, although there were some cartoonish storyboards showing these entities from an earlier attempt at making Naked Lunch into a film.


c) Mugwriter
The film has other curious biomechanical creatures in it, namely the type writers transforming into bugwriters and the sex-blob that has some characteristics of a centipede. Later there was the Mugwriter where the Mugwump would be reintroduced as a character that was his previously destroyed typewriter melted down and turned into a new machine shaped in the form of the Mugwump's head and later would at times transform into a fully formed mugwump. 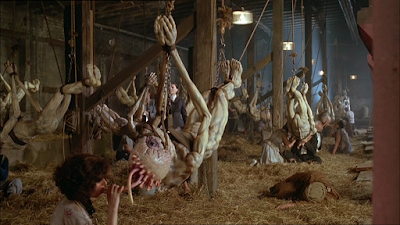 d) Appendages from the head
Originally, the creature had an appendage, either its male member or an appendage stemming from the place of the belly button, and they decided to go along with the idea of having the appendage coming from the head as a crest, partly for the sake of the actors who would be seen to be drinking from it. Perhaps one could say that these creatures, conceived by Dupuis, incorporated elements both from  the Mugwump’s and perhaps their addicts known as reptiles who had a fan of green cartilage covered with hollow erectile hairs behind each ear from which they absorbed the mugwump's jissom. 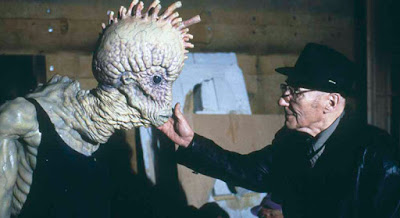 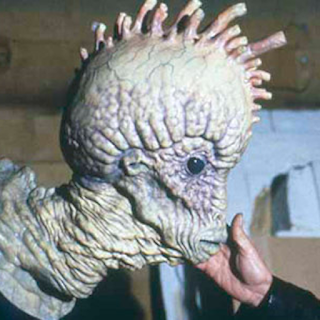 e) ideas 8th June 2016. Looking at a drawing by Giger
An untitled drawing by Giger from 14th August 1985,  predicts elements of the head of the Mugwump from Cronenberg's 1991 movie. Perhaps other creatures in Giger’s work have long humanoid reptile like faces of a similar kind with a reptile like eye, But looking at his work from his sketches from the early 1980s and a specific drawing from 1985, while none of the drawings by Giger should be expected to have any connection to Mugwumps (although Giger had read the book at some point before), there is a similarity in shapes and forms that begins to make one ask if Giger's artwork became a point of reference for Dupuis.

g) Hanging alien from The Tourist
Perhaps the hanging alien with wings for The Tourist film project might also have served as a point of reference for the face. One might openly ask if the Mugwump designer for Cronenberg's movie had been somehow influenced by these images, consciously or unconsciously.

h) Mugwump sketch echoing Necronom IV
In light of the assumed Giger connection, an earlier sketch of of the mugwump oddly echoes Giger's Necronom IV with the torso slanting backwards displaying its' ribcage and ending with an indefinite stump.