Leading from
Alien: Unlocking the design of the Space Jockey
and
Roger Vadim's Barbarella (1968)

a) In the movie Barbarella, we have a device called the Excessive Machine in the layer of Durand Durand that appears to be like the ribbed interior of a whale. The design has been generally inspired by an Egyptian Sarcophagus (reference to be found.) This set bares some basic similarities in ideas to what we find as the Space Jockey chamber in Alien. 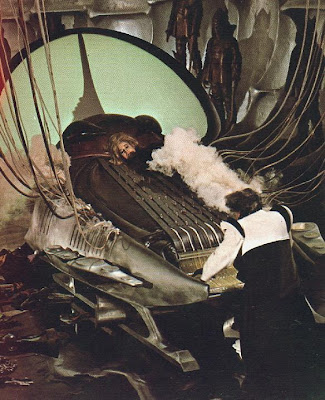 b) When presented with an image of a lit photograph of the Orrery from Prometheus, I looked at the chair with control panel the side of the platform on March 7th 2012, when the Prometheus viral campaign was running and I suddenly became reminded of the Excessive Chair from Barbarella and then the connections started to unfold. 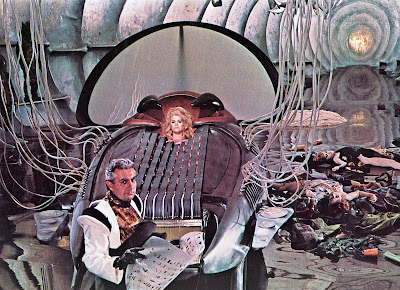 c) Wikipedia describes the device:
The device has been invented by Dr. Durand-Durand, the evil antagonist in Barbarella. Instead of being called an Orgasmatron, Durand-Durand refers to it as the Excessive Machine. It resembles a clamshell that once grasping the passenger's entire body below the neck, gently (at first) and pleasurably massages the passenger by flexing its upper half with a wave-like motion from right to left. The lid is made of long, rigid rod-like paddles that lie in a row, side by side. The paddles themselves each have one end at the bottom of the lid, near the joint of the Excessive Machine's "clamshell", and the other end moves freely. Because the paddles are not glued or welded together but instead move together, and because the paddles pivot around the "clamshell" joint and move parallel to the sagittal plane, they can have this wave-like motion. It is operated from a keyboard resembling that used to control a large organ. By properly manipulating the keys the operator may induce great sexual pleasure in the victim, sufficient to cause death by orgasm. In one of the final scenes of the movie the evil opponent is torturing Barbarella with the pleasures of this machine, during which she vocalises extensively ("oh", "ooh", "ahh", etc.). But in the end the machine overloads and is destroyed, while she survives, and feels rather well. (http://en.wikipedia.org/wiki/Orgasmatron)
Posted by wmmvrrvrrmm