Prometheus: Possibilities of merging the
universes of Blade Runner and Alien

b) Thoughts on merging the universes in the art department
However when it came to making the movie Prometheus, as thoughts were going through their changes

As it went through conceptional design stages, Ben Procter recollected that one day Ridley Scott came in one day and said "You know, I'm thinking what if it's the Weyland-Tyrell Corporation? Is that cool?"

Those around him responded "Dude, that's really cool. You gotta do it!"

Scott continued "Maybe the bodyguards, you know, that come out with Weyland, maybe one of them says Batty on his uniform." referring to Roy Batty from Blade Runner

And so those who were in the room sitting around responded "Awesome! Do it, do it!"

And so Ben Procter was sad that they never got around to doing it.

He appreciated the idea of the compatability between the dystopian futures of Blade Runner and Alien so that they might be the same universe.

If they had a Weyland-Tyrell Corporation which later becomes a Weyland-Yutani it might be suggestive of the forever shifting nature of corporate mergers.

But other than to two bearing similarities because of Ridley's thoughts about the future at the time, and that creatively they could be merged together and he would even refer to the android in Alien as a replicant, he never got at far as thinking about the two movies really being part of the same universe. 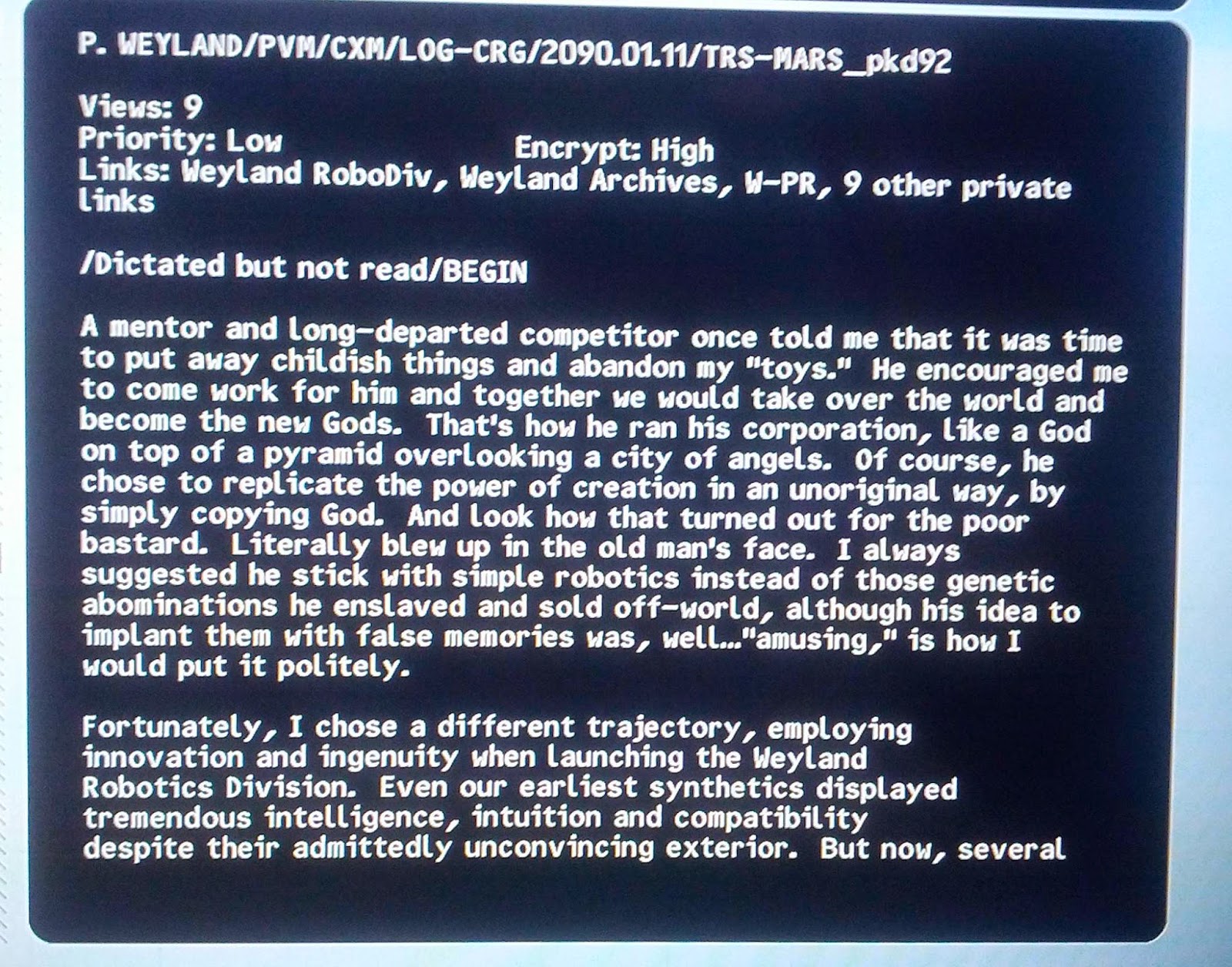 A mentor and long-departed competitor once told me that it was time
to put away childish things and abandon my "toys." He encouraged me
to come to work for him and together we would take over the world and
become the new Gods. That's how he ran his corporation, like a God
on top of the pyramid overlooking a city of angels. Of course, he
chose to replicate the power of creation in an unoriginal way, by
simply copying God. And look how that turned out for the poor
bastard. Literally blew up in the old man's face. I always
suggested he stick with simple robotics instead of those genetic
abominations he enslaved and sold off-world, although his idea to
implant them with false memories, well... "amusing" is how I
would put it politely.

d.ii) Explanation from Charles De Lauzirika
Without any direct reference to Blade Runner or characters from the film, Charles De Lauzirika who produced the Prometheus blu-ray set decided to write a piece as an "Easter Egg" to add to Prometheus Blu-Ray set as a tongue in cheek reflection of the idea that Blade Runner and Alien take place in the same universe and worked as an in-universe frame work for the viral pieces that came out with the film.

Those who watched Blade Runner will know that Eldon Tyrell's building was in the form of a pyramid that overlooked an LA of the future. However there were those who took it literally