Alien: The derelict as a rescue ship and crypt?

leading from
Alien: Afterthought
and
Alien: The Space Jockey's Story

a.i) Personal scenarios
Beginning this essay on 24th August 2016, I am recalling that around 2001, while not perceiving Aliens and its egg laying Alien Queen as anything much to do with the world of the original Alien movie, thinking about the world of thoughts behind the original movie and trying to explore further the derelict mystery,
ii) Industrial Disaster Story
I was developing the idea that on the planetoid, there was once a biological weapons factory and there was a disaster which spewed factory wreckage everywhere and left the whole planet infected and so quarantined for many millenias to come, which is something that curiously managed to get into the Prometheus story.
iii) Cut off by an intergalactic war
The other possibility is that there was an intergalactic war, the derelict was damaged and landed on a planet and a stargate shut on them leaving them stranded for many millenias many many lightyears from home. The question becomes what to do with the survivors and could something of them be preserved.
Prometheus answered that by just putting a few in hibernation chambers that would work for thousands of years, and who knows how long. No one was interested in coming to rescue them so soon
iv) Digging out an egg silo
The ship landed without an intention of ever leaving the planet, digs out an underground bunker, the survivors or surviving bodies are rounded and gathered up, and then they all become fodder for growing spores numbering some thousands.
So far none of this went any further 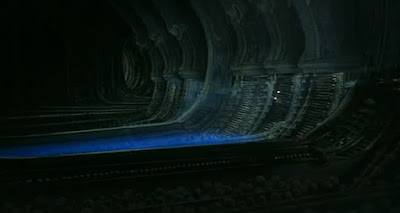 b) Preservation
These spores would somehow retain the victims' DNA and their memories, the latter would be pushing it a bit too far because it had nothing to do with what was being talked about on the set of Alien but it might work in view of Ripley 8 clone in Alien Resurrection somehow inheriting the memories of the original Ripley.
However the beast in Alien started to show instant knowledge of the layout of the ship, people have wondered if the creature had inherited Kane's memories, and so in light of that, some aspect of the minds of these survivors would somehow be retained in the spores and would be picked up probably many thousands of years later by their own people and reactivated to continue with their existences.

c) Ritual
The pilot too dies as a result of a facehugging and chestbursting as if it's carried out as a ritual and his DNA is carried through with the chestbursting alien whose DNA too would have been transferred to the spores created and it would be the alien that burst from him that would be out to carry out the ritual slaughter.

Part of the idea perhaps comes from Ridley knew was being assumed during the time of the production. that the derelict was carrying its own kind, but I think that there's also an element bleeding through of the Jodorowsky's Dune's Castle Harkonnen idea where the people go in, are ground up and digested at the bottom of the building.

Something that I have looked at since Prometheus came out were different interpretations of Giger's Alien Life Cycle Hieroglyphs,

Numerous people have seen it as a depiction of a ritual where members of a biomechanical humanoid astronaut civilisation and later the Space Jockey willfully give themselves to be sacrificed to give birth to the Chest Burster.

I think that I too have bought into that idea with the need to see it as a ritual that the Space Jockey's somehow felt the need to adhere to.
So in that respect we're talking about the collection of spores as a DNA vault, and an ambulance that slaughters all the people it rescues.
A seemingly insane alien ritual that might be normal life for this ancient outerspace civilisation. 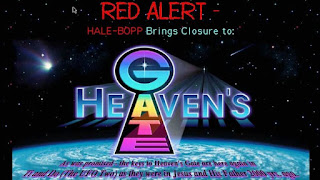 d) Cult Suicide
This idea was thought up with very little consideration given to Aliens fans who want alien spores to be actual eggs layed by an alien queen in the manner of termites, and later I would discover that the Jones Town massacre took place during the same year as the Alien production.
Does this mean that the alien civilisation are afraid of becoming fascist and so have to undergo the transformation into spores to join the communists, and one could even compare it to much later Heavens Gate cult suicide where they believed that their souls would as extra-terrestrials travel to the spacecraft that was supposed to be the comet Hale-Bopp, there were also the Solar Temple cult suicides in 1994 and they believed that their souls would travel to the Sirius star system "leaving 48 corpses in Switzerland, divided almost evenly between a farmhouse in Cheiry and a cluster of gutted chalets 100 miles to the south in Granges-sur-Salvan" (See techgnosis.com/solar-temple-pilots/). In that case, the derelict ship might as well be a sort of a boat shipping the dead to some sort of mythological place.


e) Temple
Along with this idea, the derelict ship interior becomes a sort of a temple in Ridley's mind with the space jockey on the chair serving as a central icon, which brings me to want to imagine it as a temple to Sokar  with the space jockey as seat as an Ancient Egyptian Sokar Funerary Barque transporting the souls of the dead to heaven. (See: Alien : Evolution of Space Jockey via the Egyptian Book of the Dead: The Henu Barque (AKA The Sokar Funerary Barque) 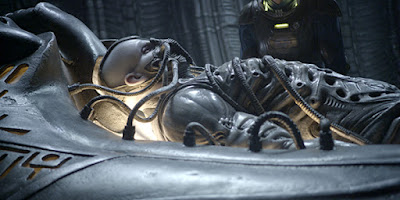 f) Echoes in Prometheus
So having thought that, I appreciated the fact that in the film Prometheus there was the Engineer humanoid discovered sleeping for aeons waiting for someone to wake him up sometime in the long distant future.
This humanoid had come from a point in time when the place he was in had been infected by an outbreak of the black stuff that was contained in the ampules.
Meanwhile the ampules chamber is also a temple environment. I'd rather that the ampules were full of some sort of alien DNA but I'm not relying on explanations from Prometheus to give solutions to the mysteries of Alien 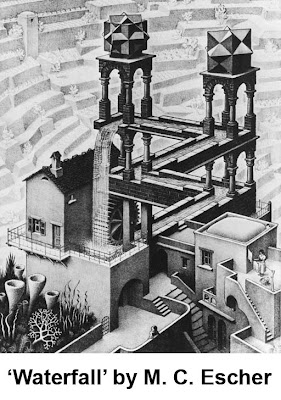 g) Giving into Escher illusions
By the year 2021, I myself have  become less concerned about inner dimensions of the derelict spaceship with the silo within or beneath.
I have been willing to give in to the idea that it all makes sense in the optical illusion world of Escher illustrations such as Waterfall, since that was an issue to either play with or work around in the Alien production when it came to making the models of the spaceships
In such worlds you think you're seeing it from one angle and then you realise you're seeing it from another, before you realise that neither make complete sense but they fill out space conveniantly
Here it would be as if the logic of such illustrations would tie all all loose ends of the different elements of Ridley's story telling in the Alien series that were floating in the air after one production cut after another.
Now the Space Jockey of old no longer exists or is not ever what you thought it was but instead was a suit containing a significantly smaller humanoid being who is now referred to as an Engineer, a very very tall pale faced bald human perhaps eight foot tall.
Does the Space Jockey of old that was a fifteen foot giant actually exist as a character any more or is that simply a biomechanical suit for a smaller human?
Was there ever a civilisation that actually needed to be saved by cruel ritual methods on the planetoid where the derelict ship in Alien came to rest?
Would the so called Engineers even really care that much?
(See: Alien: Escher etched on the brain of Brian Johnson)
Quote Source