Alien: Brett's death scene references "The Adventures of Tintin and The Cigars of the Pharaoh" by Hergé, as published in La Petit Vingtieme #4, January 1933 ?

Leading from
Alien: The Development of Alien by way of Tintin?
and

Hergé
and
Alien: Nostromo: The garage leading to the Claw room


a) Jacket left hanging on a statue becomes the chestburster's discarded skin
Tintin is looking for his dog Milou/Snowy who has got away as they entered an Egyptian tomb.

In Alien, Brett searches for Jones the cat in the garage.

Tintin finds an umbrella, a discarded tail coat and shirt cuffs a man he is also looking for hanging from an Anubis statue

In Alien, Brett finds on the ground the shedded skin of the chestburster

b.i) Into the leg room

Tintin enters the next chamber through the very tall doorway continuing to look for Milou/Snowy the dog.

The comparative scene where Brett searches for Jones the cat in the garage, designed with Ridley Scott's intentions that it look reminiscent of an Egyptian treasure room, and so he enters through the tall doors leading into another chamber. 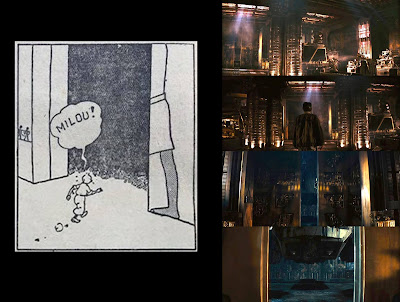 Then it would appear as if Ridley Scott found out about how they were using the Tintin comic books, and decided to look at one of the scenes showing a drug induced hallucination, that appears to have caught artist's imagination over time, and so decided to translate it into the scene of Brett's death

I believe that he started using it amongst a few other pieces of artwork by other artists as reference for an early storyboard featuring Brett's death, with the pharaoh becoming the alien beast.
See: Early storyboard showing Brett's death scene for "Alien" (early 1978) by Ridley Scott references panel from The Adventures of Tintin and the Cigars of the Pharoahs, originally published in January 1933 in La Petit "Vingtieme" #4?
b.iv) See also: Panel from a page from "Les Adventures de Tintin - Les Cigars du Pharaon" first published in Le Petit "Vingtième" no.4, p9 January 1933, by Hergé

b.v) Tintin being gassed turns into Brett enjoying the water raining down?

Thinking about Brett's death scene as it would be filmed. The streams of gases abstractly become pouring water, and instead of being drugged like Tintin, Brett enjoys a shower 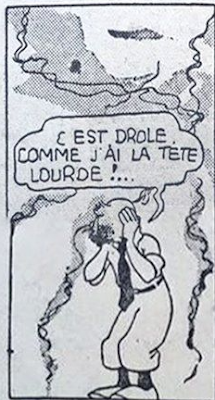 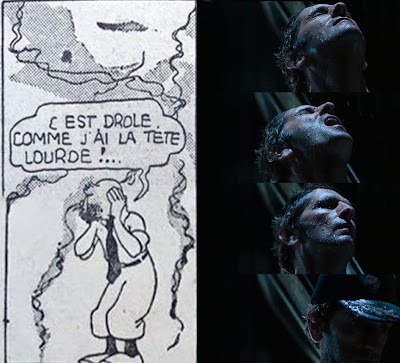 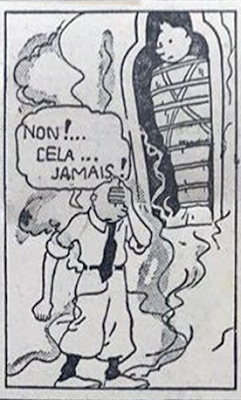 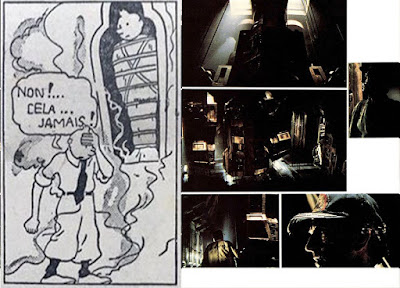 b.vi) The hallucination of the pharaoh becomes the alien beast grabbing Brett.

Since its lower body appears to be absent , it could be imagined to have come out from another part of the picture 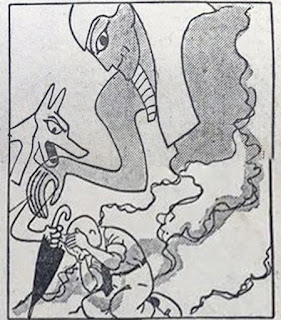 The Pharaoh reaching down from above Tintin looking as if he could snatch him becomes the Alien, although showing the scene from the final film would make it difficult to show the comparison. Perhaps the Tintin illustration makes it look as if the Pharoah was somehow getting into Tintin's mind, and here we have the alien beast mesmerising Brett.

c) Cigar box transformed into a vehicle in the garage
With that, since in Alien, the chamber when Brett is killed is connected to the garage, perhaps the box of cigars abstract becomes part of a vehicle, and the cigars become the large shells on an abstract vehicle.

It would have been a case of using anything that could be seen in the illustrations that grabs the imagination in some way as a basis for a design no matter how abstract it might seem.

The vehicle a top part that slopes inwards at the side with a row of circles, and the lower part t

has sides that slop inwards near the top and at the top is slopes inwards downwards with a row of circular structures as if the circle on the inside lid has been multiplied.