leading from
Chris Foss' "waldo-like" repair machines
and
Alien: Brett's death scene references "The Adventures of Tintin and The Cigars of the Pharaoh" by Hergé, as published in La Petit Vingtieme #4, January 1933 ?
and
Alien: Development by way of Tintin
and
Hergé

The full page from the Tintin story, where Tintin is trapped in a room, it is filled with streams of gas that drugs him.

He begins to hallucinate having visions of him in a sarcophagus and a Pharaoh materialises over him.

During the latter part of the hallucination, he is carried away by people who have entered the room.


b) The two significant panels. It would seem that Chris Foss used elements in a transformed way for his illustration, and imagined the streams of gas being streams of gushing water. 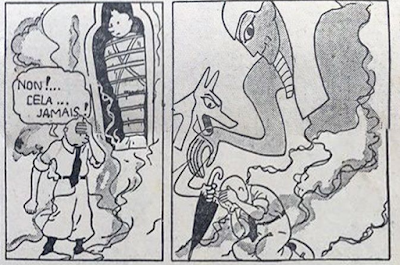 c) In comparison to the Pharaoh hallucination

c.ii) The cloud making up his torso becomes the back arm of the machine 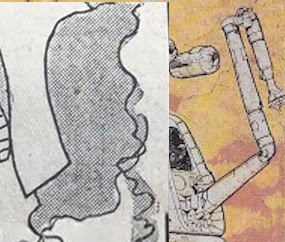 c.iii) The eye of the pharaoh become the broken pipe 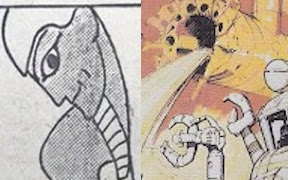 c.iv) The neck, ears, open mouth and snout of the of the Anubis become pipes 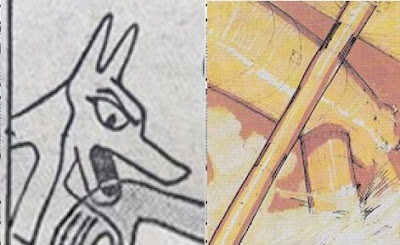 d) In comparison to the Tintin in a sarcophagus hallucination panel 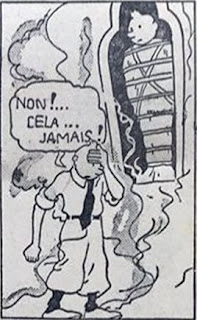 d.ii) The two images side by side. 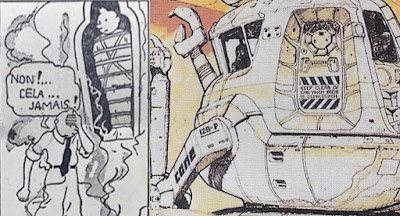 d.iii) Tintin in the sarcophagus becomes the door into the vehicle in a much transformed way. 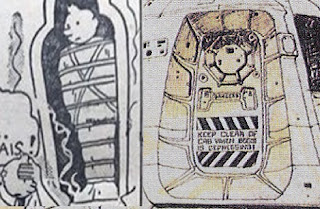 d.iv) Tintin down below having the hallucination becomes transformed, with his arm om the left becoming the upper arm of the whole his arm on the right becomes as it were the sloping side of the top of the shoulder into which the arms connects 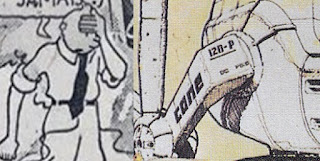