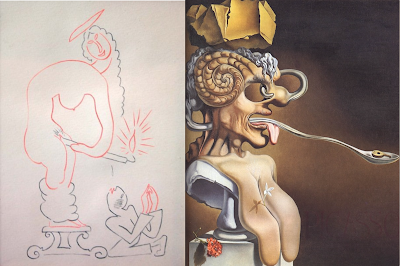 
a) "Vierge s'introduisant un cierge devant un dévot agenouillé, ce dernier goûtant aux délices de l'hymen"  (1940s?)   (which translates in English as "Virgin introducing a candle in front of a kneeling devotee, the latter tasting the delights of the hymen ") by Sergei Eisenstein


c) Here the bent over upper torso of the woman becomes the head, while the candle becomes the long spoon with a key.

d) Her buttocks becomes the back of the neck 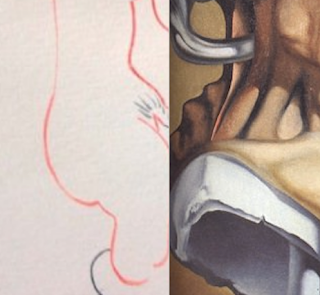 e) The halo would then become the box.

g) The plinth is simply transformed into a different one

h) The man below is transformed into the breasts, while the perhaps his lips are tranformed into the flower. However you might also want flip the man around and imagine that the arm have become tbe breasts and so where the fingers meet becomes the butterfly