a.i) References spacecraft from Valérian and Laureline : Ambassador of the Shadows
(Story published between 1 July 1975 to 1 October 1975) illustrated by Jean-Claude Mézières ?


a.ii)  The two images side by side 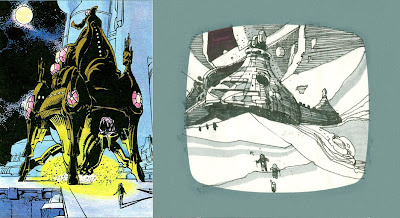 a.iii) Top parts. The right corner pod becomes distant part of the derelict off in the distance connected by a connecting tube.

a.iv) The right landing leg support would become the landslide 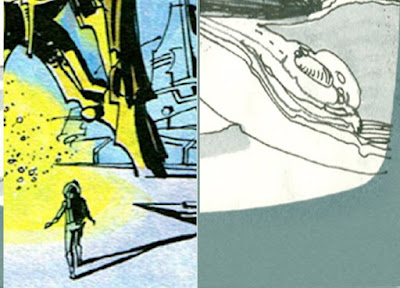 a.v) Here, what is presented in a.iii and a.iv can be seen in relation to each other 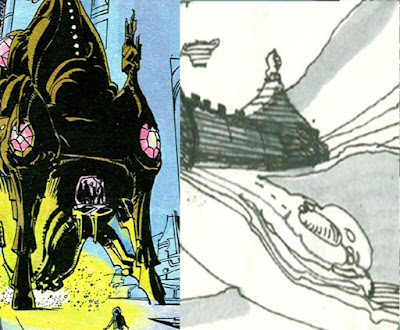 b) References Tintin in Tibet?
The Early Ridleygram of derelict ship looks as if it loosely resembles the panels from Herge;s Tintin in Tibet comic books story originally serialised from September 1958 to November 1959, and here the adventures reach a chorten in the middle of the mountains, where the ashes of great lamas are preserved.

In the Ridleygram, Ridley his vessel in a way that's similar to the Moebius design, but also we know that he has been using the Giger's Necronomicon as a bible.

Interestingly enough to me though, I connect connecting it with the Mezieres design, the very top of the space craft has been turned into a cluster of crystals almost like the windows of the spacecraft from the Valerian comic book story.

Ridley has drawn perhaps three of these pod like derelict structures in the image and connected them with long bridge tunnels.

However he was not satisfied with these ideas, and also thought that Moebius' design looked too Victorian, so he was keen to take it a step in new direction.

d) See: Evolution of the early  Ridleygram of Derelict exterior via The Pink Panther #22 (Published Oct 1974 and Chris Foss' Emperor's Palace for Dune

The way that Ridley drew the derelict closer up makes it look organic as if it has been slightly Gigerised and also it bears some resemblance to Giger's egg silo exterior that had presented as a completed design on March 30th 1978, which also had a rounded bottom in some sketches making it look like a giant bottle like container

At this stage, Ridley's own design for the egg silo appeared to be loosely based on HR Giger's Castle Harkonnen painting for Dune that would be found in Giger's Necronomicon.

Giger's breast shaped egg silo was initially a pyramid that soon undergone an extreme transformation in design to something more organic looking.