Alien 3: Change to a dog-burster

a) Behavioural characteristics as another reason for change

a.i) A need for a faster and sleeker alien

Something going on in David Fincher's mind had decided that alien took on behavioural characteristics of the host and so decided an ox would make it less vicious.

They found the most conceptually interesting stage to be the 'Bambi Burster, a puppy like creature that jumps out of the Rottweiler's chest and scampers across the floor.

David Fincher thought it would be more sleek if the monster came out of a dog, and the Rottweiler is a pretty brutal animal to start with.

This meant to him that instead he wanted to use a dog as the host which would in his view make the creature not as elegant a creature than it was before.

Fincher thought that this would help when they got into the big chase sequence at the end because it would give the exciting POV and explain the reckless attack mode that the thing was in.

This change would break everyone else's heart because the idea of a dog as a host for an alien creature had been used in the movie "The Thing" in a significant way.

a.iii) Shooting of the dogburster scene

In November 1991, it was known that Jon Landau supervised effects filming at ADI in November, shooting a scene in which the alien bursst forth from a dog

Norman Cabreira sculpted, painted and did the finishing cosmetics for the dog lying dead after the chestburster

(P.S. I don't have personal knowledge of the running speed of either creature but one can look up the running speed of an Ox and find that it can be 40 km/h and the Rottweiller is known to reach up to the same speed but of course one can say that a Rottweiller is much more agile and vicious. It doesn't look as if anyone was that bothered anyway at the time about such details, and it might be strange to start wondering about the alien taking on the emotional characteristics of its host, but it's the direction that they went whatever. At least a dog sized alien would be more maneuverable in the chase sequence in Alien 3 rather than a lumbering creature the size possibly bigger than an ox) 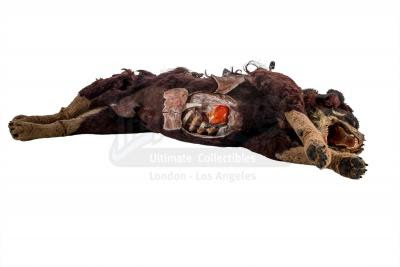 b) Whippet used in ADI's Bambi-Burster

David Fincher needed something that could walk and be photographed from every angle, which made him think about putting a dog in a suit to supplement a cable-controlled puppet.

Woodruff thought that it seemed very much an idiotic idea but this dog in a suit became at least something exciting to try out, whatever the result. He saw possibilities in what they produced and would have liked it to have been liberally painted with more deep, dark shadows and have some creepy sounds added

Originally for the Bambi Burster, they planned to have a Whippet dog in a suit, but it wouldn't perform on set. Once they put him in the latex costume, the animal locked up. All they wanted him to do was trot down the hall, but it stood there unable to movie. So they ended up sliding the dog into shot. 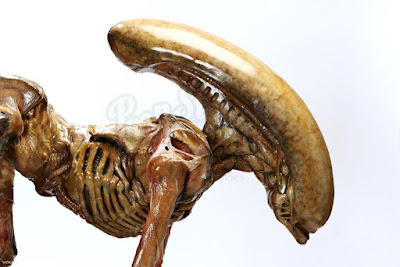