The Henu Barque trail: The Papyrus of Ani

leading from:
The Henu Barque trail through the era of Ramesses II to Ptolemeic period 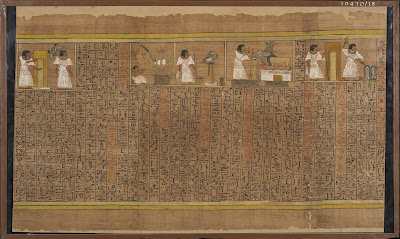 The full page from the Papyrus of Ani at the British museum.
Source https://research.britishmuseum.org/research/collection_online/


Plate 18
The first in a series of three linked scenes, depicts Ani kneeling before a divine bark while pulling taut the rope holding it on its sledge. This illustrates chapter 71. The text continues the motif of enabling the deceased to "go forth by day", the topic of the previous chapters 91 and 92 . The central image is the bark of the god Sokar, one of the most important mortuary gods of Egypt. Sokar is often associated with the necropolis by his common epithet 'Lord of Rosetjau.' The focal point of Sokar's cult was the elaborate portable bark shown here. This is called the henu-bark and was carried by priests in processional rituals. The bark is affixed to a sledge, which in turns rests on a repository stone, just as it would during the intervals between the occasions when the god paraded about in public. The two carrying poles, which would rest on the shoulders of the priests, jut out in front and in back. The elaborate prow with the reversed antelope head is the chief characteristic of the bark. Sokar is usually depicted as a recumbent falcon bound in mummy bindings so that only his head is visible. In this scene, the god's head is shown protruding from the shrine in which his image is kept. The same falcon's head appears as an emblem at the top of his shrine. The rubric of Chapter 74 expresses the intent to make the deceased 'swift-footed when going forth by day,' but it is not clear how the wish relates to the accompanying scene.
The next vignette in the series belongs to both Chapter 8 and Chapter 2. The scene shows Ani standing at the left holding his staff before him in one hand while the other grasps a handkerchief. Dominating the right-hand portion of the vignette is a large-scale rendering of the hieroglyph for 'West,' a falcon perched on a round-topped standard with a feather protruding in front. The base of the standard is fixed into the hieroglyph for 'mountain' or 'desert.' Two jars flank this hieroglyph. A similar scene sometimes occurs as the initial scene among the vignettes which accompanv Chapter 17, appearing before the senet-playing scene. The title of Chapter 8 is "Chapter for opening up the West by day,' presumably ensuring that the deceased will be able to move about in the beyond by day as well as by night. The opening phrase of the chapter contains a play on words in Egyptian: 'Hermopolos (Wenu) is opened (wenu)." The title of Chapter 2 states that it is intended for 'going out into the day and living after death.' The relationship between the chapter and texts, their rubrics, and accompanying vignette is obscure.
The last of the three linked vignettes on this plate belongs to Chapter 9. The scene is something of a visual pun. The ram standing on the plinth-like shrine with a small lamp before him is another another form of the word ba. The shrine represents a stylized tomb at whose centre is an open door comparable to the Rosetjau-shrine in the vignette for Chapter 17 (Plate 8). This suits the chapter's title, "Chapter for going out into the day after opening the tomb." The image of the ram, then, serves roughly the same purpose as the ba-bird in the vignette for Chapter 92 at the end of the previous plate.

The following vignette shows Ani treading upon a snake as he spears it. There is something incongruous about the detached manner in which Ani performs the dramatic activity. The text belongs to Chapter 10, whose purpose is to enable the deceased to 'go out into the day against his enemies in the God's domain,' the land of the dead. Although there is no demarcation line at this point, the column if text to the right of this vignette actually belongs to the next chapter.
The last vignette on Plate 18 shows Re as a falcon-headed god with a large sun-disk on his head, sitting in one of the mark barks in which he travels. As befits Re, the bark is shows on top of the sign for 'sky.' This boat has an elaborate rectangular mat affixed to its prow. On the top of the mat a small figure of a nude child sits with his fingers to his mouth. This child is a deity Horus-the-Child, or Harpocrates as the Greeks call him. The accompanying text is one of  many sun hymns that modern scholars have lumped together under the overly broad heading 'Chapter 15.' The text varies so much that virtually no two versions are alike, so that a more accurate term would be simply "Sun Hymn"
(The Egyptian Book of the Dead, The Book of Going Forth By Day the complete papyrus of Ani", edited by Eva Von Dassow, p164)
Posted by wmmvrrvrrmm