Ivory label of the Pharaoh Semerkhet

leading from:
Early depictions of the Henu Barque 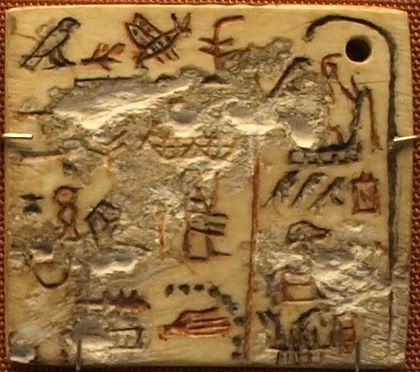 "Ivory label of the Pharaoh Semerkhet, circa 2900 BC. Originally a label for an oil container, it also references a religious festival in a specific year of his reign.

The right section, introduced by the'year' -sign Renpet (a bald palm stem), reports -from top to bottom -  a feast of the Sokar - bark, a visitation to the temple of the ancestor-deity Wer-Wadyt and the travelling in a royal boat.

The left part of the label shows the throne name Iry-Nebty of Semerkhet with a blessing wish below.

On the left upper corner is described the content of the jar, to which the label was once adjusted.

Also the name of the high official Henuka is preserved, who was obviously responsible for the delivery of the mentioned jar."  (http://www.quickiwiki.com/en/Semerkhet)

"A label of Qaa from Abydos records the third occasion of a festival involving a divine bark (Dreyer et at. 1996:75). a celebration also attested on the Palermo Stone in year 5 of an unidentified First Dynasty king, year x+6 of Den. and years x*6 and x+ 1 2 of Ninetjer (see Figure 8.7).

In later times, the most prominent festival involving a divine bark was that of Sokar. god of the Memphite necropolis.

The festival mentioned on the Palermo Stone was first read as the 'Festival of Sokar’ by Schafer (1902). and this interpretation has been widely accepted.

However, the form of the bark shown on the Palermo Stone is not the characteristic Henu-bark associated with Sokar (Anthcs 1957:78).

Rather, it belongs to a group of divine barks which includes the Maaty-bark and the sms-Hr-boat of the king.

None the less, the Pyramid Texts make an explicit connection between Sokar and live Maaty-bark.
so the festival recorded in the annals may indeed be a festival of Sokar (Gaballa and Kitchen 1969:14).

In the reign of Ninetjer, the Sokar festival seems to have been celebrated at regular intervals of six years (but note O’Mara 1996:204).

In subsequent dynasties, the festival may have become annual, since its celebration was no longer a
distinctive enough event to be used tor dating purposes (Gaballa and Kitchen 1969: 18).

(1) Entry from the second register of the Palermo Stone, referring to a year in the early First Dynasty as 'the year of the second occasion of the Djet-festival'; the hieroglyphic determinative suggests that this festival involved a boat (after Schafer 1902 : pl. l); (2) ivory year label of Semerkhet from Abydos. referring to the regular royal progress by boat ( the ‘following of Florus’) and another ritual denoted by a divine boat (bottom right- hand corner) (after Petrie 1900: pl. XVII. 26); (3) a relief block from the Step Pyramid complex of Netjerikhet showing the king dragging a boat, perhaps during the Sokar festival (after Firth and Quibell 1935. II: pi. 109.1). Not to same scale."