a) Roger Dicken begins work on the Alien
a.i) Roger is contacted
Perhaps it was Ivor Powell who had phoned him up , but in later years he wouldn't be so sure.


a.ii) Starting work
Roger Dicken was originally to do the big alien, he created a maquette of the creature and begun to sculpt the full size creature.
However, as he got involved in it, he soon found out that Alien was a "board room picture".

He did his best to create a life size version of Alien Monster IV, including the very elongated cranium and translucent skin.
a.iii) Producers and their different opinions
He noted as an example that amongst the producers, one man wanted a foot one way and another man wanted the tail another way,
At one point they even didn't want a tail but in the final alien of course the creature did have a tail.

Dicken found it difficult to work, and to avoid having a nervous breakdown because of this situation he decided to call it quits.

b.ii) Handing in his notice
He wrote a letter to the producers telling them that he didn't want to be involved in creating the big creature.

This created pandemonium of course and they told him that he was letting the picture down but he had to be honest with them due to what was going on.

As far as he would later recall, it was before Giger came aboard.

However he would stick to the two smaller forms. 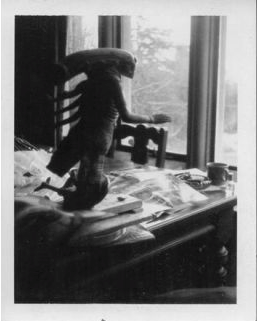 d) Roger's views in hindsight
d.i) The things that they had let go of
However in hindsight once he had seen the movie,  Dicken noticed how they had given up on elements that he was being asked to do but had trouble with.
They gave up on the translucent skin, cut the length of the head down by half, and there was the fact that the adult alien was hardly shown in the final movie,

d.ii) How more people were involved
He also took notice of how they got a whole workshop onto the project, including Carlo Rambaldi doing the mechanical head in America, with another mechanical head was being built in Europe as a standby, and what it cost them he didn't know, but he felt that the fortune spent was unwarranted.
d.iii) What he would have done if only he had known

For the aggravation involved, he thought that they blew it with their beast

Had he known what that the creators of the final adult alien themselves would give up trying to do in the end, and considering what little they showed of it in the actual film, he believed that left to his own devices he would have been able to come up with the goods in a satisfying way and give them a lot more.