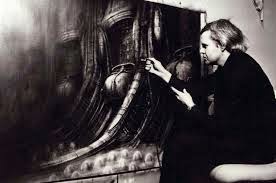 a) Reaching the first version
By 19th July, 1978, Giger's concept for an Egg Silo interior had evolved.

The egg wagons that had scooped up the eggs and transported them along a rail to the pipes had disappeared, along with their monorails, they had now been transformed into big pregnant capsules on the wall of the silo which Giger had decided were symbols of fertility.

Above the capsules were entrance tubes coming down at the side rather than in the centre of a circular buildings, and a space for the hieroglyphics painting to be seen.


b) References a Chris Foss derelict?

d) Voysey creates miniature
Peter Voysey had been busy created a 1/25th scale model of the silo interior, however despite his work on this,  in Giger's absence the pregnant capsules were declared superfluous and the entrance tubes disappeared as well