Directions to pursue with Prometheus

a) Gods
Ridley Scott when developing his idea for a sequel to Alien talked about associating the space jockeys with the ancient god Mars who was the god of war, although Mars was not far away enough.
In the trailer for the movie, the idea of the hoot of an owl was in the music for the trailer, and such an owl might have for me been representative of Athena the goddess amongst other things, wisdom, and this would have been alerting me to some sort of knowledge to be gained through watching the movie.

b i) While watching the movie, the ancient tablets even thought they were only to be seen briefly indeed inspired me, perhaps to want to look at their origins and then want to redesign these things because it never seemed to be perfect enough. One could see errors in the logic of some of these things but then again it was all still very interesting.

b ii) I wanted to imagine what the Egyptians would have made of the influence of the Engineers or the Space Jockeys creeping into their shamanistic experiences that showed up in their book of the dead murals and papyruses. Giger had already layed out the language for this back in the 1970s especially with his work for Alien, with the space jockey and seat being inspired by the Egyptian images of the Henu Barque, and the Was sceptre creeping into the form of the alien and stating itself as the hammer tip of the derelict ship

b iii) I also wanted to imagine what the artists Moebius or Giger would have made of the Pakal Votan tomblid which inspired their Mayan Space Jockey tablet. I had then discovered that Giger had already explored influence of that tomb lid to some degree in his Necronom V painting but didn't come up with a rocket exterior though. I also started to imagine Moebius transforming the Mayan Space Jockey into an Arzach like character who traveled through ancient tombs and the depths of space in a small rocket ship that was perhaps the size of an oversized dragster. I wondered what kind of adventures he could have that might loosely conform to the rules of the world of Prometheus

c) Holographic Orrery
When I watched the orrery scene, on one hand it posed the question to me about whether the universe was holographic. I also thought about a book that I had read as a child, The Most Beautiful Tree In The World which was about a huge Christmas tree that was discovered and transplanted to an Ice Rink in New York, which I later discovered was the Rockerfeller Centre ice rink where a statue of Prometheus was to be discovered. Not being an American, I wouldn't have been conscious of the place being real when I read the book as a child and enjoyed the illustrations 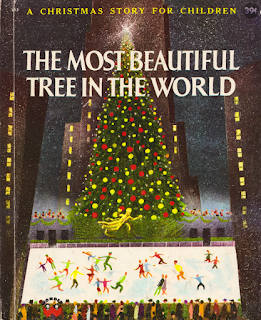 d) Prometheus by way of Eden Log and Pandorum

d i) I had seen an review for the 2007 movie Eden Log in a magazine and in the opening scene , it began with a flashing light and then it would be revealed a man without any memory suddenly waking up, and a reviewer for a magazine had the idea that it was as if the human were something that had manifested because of the flashing light were the initial spark of this reality of the film. I was very inspired by reading this interpretation 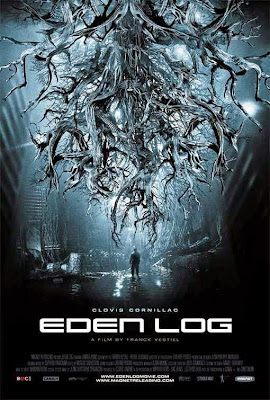 d ii) When I saw Prometheus in my own mental associations, I thought about the orrery as something that was manifesting the giant that would be found asleep in its sarcophagus and if the orrery hadn't been turned on, the giant would not have been found alive, he might have been another who would have been dead with a hole in the top of his sarcophagus.


d iii) Eden Log, without being given credit had been remade as Pandorum released in 2009, produced by Paul Anderson, which was also considered a good film in its own right. In Pandorum a human finds himself coming out of hibernation in a pod removing a severe breathing mask. He appears to be immune to a virus that has transformed all the rest of the other people in the ship into mutants in the spaceship in which he is. In Prometheus the Engineer has not succumbed to the transforming infection that has  killed his brethren.

e i) The transformations taking place in the movie that were due to the black fluid were also in my mind, perhaps loosely transformations in the manner of Greek Mythology as seen in Ovid's Metamorphoses. Perhaps the crew of the Nostromo themselves are incurring the wrath of the gods with their exploration.

e ii) Elizabeth Shaw's partner Charlie Holloway undergoes the beginning of a terrible transformation enough for him to have his DNA changed so that when he has sex with Elizabeth Shaw, she eventually gives birth to a multilimbed terrible monster loosely known as the Trilobite. Fifield also undergoes a transformation into a creature with the rage, strength, agility and intelligence of an angry ape.

e iii) In Greek Mythology, the goddess Gaeia known as Mother Earth gave birth to the Titans, one of whom was named Prometheus, she also gave birth to the single eyed cyclopses and then the hundred handed giants. Echidna, an monster who was human female at the top half and serpentine at the bottom became the mother of monsters, having given birth to various terrifying monsters such as Cerberus, the Chimera, the Lernean Hydra, and by some accounts the sphinx and the Nemean lion. However Pasiphae the wife of Minos after having made love to a bull gave birth to the minotaur.

When Perseus beheaded the gorgon named Medusa, Pegasus, a winged horse, and Chrysaor, a golden sword-wielding giant, sprang from her body. 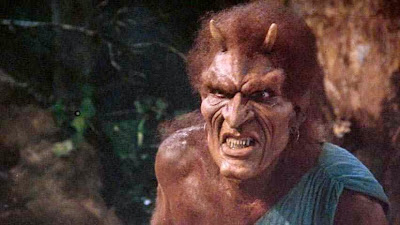 e iv) Mythology was given a contemporary spin by Ray Harryhausen in his various movies includingthe 1981 movie Clash of the Titans, Calibos the son of the sea goddess Thetis was punished by Zeus for slaying most of his herd of winged horses, and only Pegasus survived. He was then transformed into something close to a deformed satyr. When Perseus kills Medusa, out of her blood springs giant scorpions. In the 2010 remake of Clash of the Titans, Acresius punished by Zeus to transform into Calibos but is then given strength by Hades to pursue Perseus is soon slain and later giant creatures that were scorpions merged with elements of crocodiles known as Scorpiocs grew out of Calibos remains.

e v) The original alien life cycle from Alien in itself had become a strange sort of set of mysterious symbols with the appearance of the egg shaped alien spore leading to faceraping facehugger leading to the man giving birth to a chestburster leading to the huge alien creature that grew in a short time and could as shown in the comic book squash itself into a box shape. Fifield's reappearance as a humanoid with his legs bent up backwards behind him also loosely reflected the odd intended flexibility of the original alien.

f i) Small worm like creatures when  exposed to the black substance in Prometheus begin to transform into the winged headed snake like creatures known as hammerpedes, one of which attacked and killed Milburn. Were the worms always supposed to be there in the sealed off environment to transform into dangerous hammerpedes once the black substance had begun to leak?

f ii) Neca had made a hammerpede that came with their Deacon figure. I might have my engineer figure hold one as if it were a symbolic staff and then it seemed almost an alternative form of the Egyptian Was-sceptre. That becomes interesting as exploration because one can look at the fact that the hammerpede's hammer shaped head was inspired by the hammer head tip of the derelict ship that had been inspired by the giant blue Was-Sceptre as seen in the V&A museum. That is not to say that it had to only be a Was-Sceptre but they are relations.  (See: Influence of the Was-Sceptre on the design of the tip of the derelict's engine)