a.i ) Looking through Graeme Wood's Twitter account on 24th July 2018, I had seen that he was posting pages from old Radio Times and TV Times amongst various other magazines. From pages of a 1963 TV Times, an image from the film Twelve Flags South lept out at me and I suddenly realised that there was a likelihood that HR Giger had seen this image. I searched through the various images and it resonated with Giger's Beauborg. This became an odd realisation because this was the first TV Times image that I had connected with a Giger painting, and this one was one that had stumped me for a while.

b) Kiwi from Zoo Time


b.i) Looking at a page associated with the other one, I looked at the Kiwi image and thought that this would have been perfect for Giger to absorb into his Beauborg, however he would have had to turn it around. 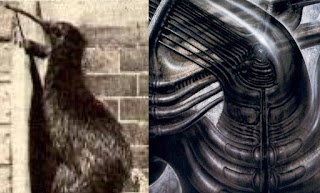 b. ii) The Kiwi image is reversed and with the head beneath a glass hood, the beak transforms into multiple tendrils connecting with the sperm like forms on the left of the paintings