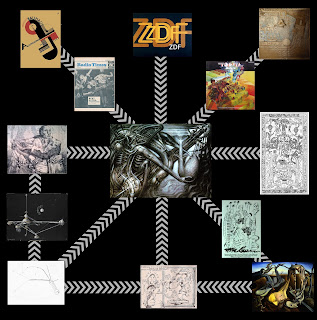 a) ZDF
ZDF is to be found etched into the surface of the strange curving trunk like form that curves through the centre of the picture. Zweites Deutsches Fernsehen, usually shortened to ZDF, is a German public-service television broadcaster based in Mainz, Rhineland-Palatinate.

d) See: References the Bauhaus exhibition poster for 1923 by Joost Schmidt via the cover of the Radio Times 17th-23rd October 1964?

e) See: References ceiling decorations from Temple of Hathor in Egypt via the cover of Tomita- Bolero?

f) See: References the Betty Hill star map via both the "Dogman in Doktor Oktorpus Nonplussed" (1976) written by Bill Fisher and drawn by Hunt Emerson and Drax's Space Station for Moonraker via Peter Till's radio times illustration for The Risk Business?

g) Pincer face with laser beam
We can see one of the abstract details hanging down from below the bird looking as if it ought to form the hand holding the creature in Giger's art, and the position of the mouth of the creature grows out of the idea of the star or planet that has been given the face of a human and the curve of its brow on the side becomes the shape of the mouth of this creature as it receives a blast of fluid that looks as if it is being blasted out of the face of another creature that in the Pakal Votan tomb lid seems to be part of the tail of the bird touching the face.

Perhaps it is being projected at the furry creature as a laser beam, just as the engine from Chris Foss painting showing a space craft with a pincer star drive 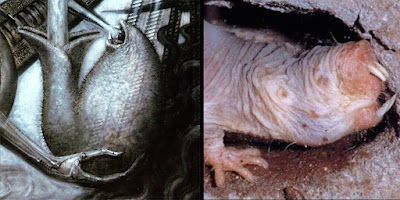 j) See: Referenced in panel showing the comic book character Darkseid holding a mother box as he tries working out the Anti-Life equation from Saga of the Swamp Thing Vol 2 #62 (Published 1987) by Rick Veitch and Alfredo Alcal?