Alien: Development of Space Jockey with seat via The Pink Panther Strikes Again?


leading from
Alien: Development by way of the Pink Panther movies?

a) In The Pink Panther Strikes Again (1976), we find that Chief Inspector Dreyfuss has gone inside, and has build a doomsday weapon that he plans to unleash upon the world, that fires a laser beam that makes things disappear.

It's to be found built in a castle and the device is set up like a telescope, and part of the castle opens up like an observatory dome.

In the original Alien script, there wasn't this strange telescope or laser cannon that the Space Jockey was attached to since he was simply fused to his seat, and when they built the final thing, no one really had a final word whether it was just a telescope or a cannon.

Was a part of the derelict ship supposed to open up like an observatory dome, was it connected to equipment on the ship's exterior to see outside or it saw through walls?

So I might wonder if the presence of the idea Doomsday laser beam weapon device was brought in to the design of the Space Jockey set.


b) Three images of the doomsday weapon, two are from the film 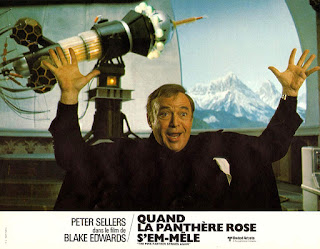 c) The Space Jockey set as built for the film. 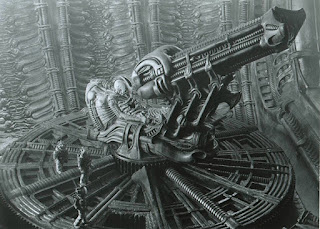