leading from
Occator crater lights complex on the Ceres planetoid
a) Illustration of a lentoid featuring a daemon standing between two lions from The Mycenaean Tree and Pillar Cult and its Mediterranean Relations written by Arthur John Evans, (published 1901) 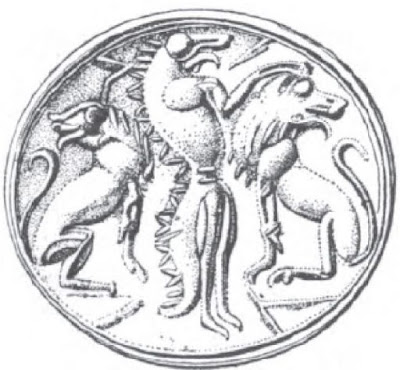 b) I'm obviously painting myself into a corner with this, but what could the creator of the lentoid design done with an image of Occator Crater to turn it into this 'daemon standing between two lions ' ?
Well it does seem daft to assume that Myceneans knew about this crater across the solar system but it's stuck in my brain that this was the case.
I want to apologise to everyone for having this idea, but I am going forwards with it.
(NB I don't think that they'll have me on Ancient Aliens any time soon talking about this idea. I think that whatever I hoped to approach with this exploration has been doomed by this whole uncertainty about things in the distant past anyway)  Image source:  https://www.mps.mpg.de/Cryovolcanism-on-Dwarf-Planet-Ceres 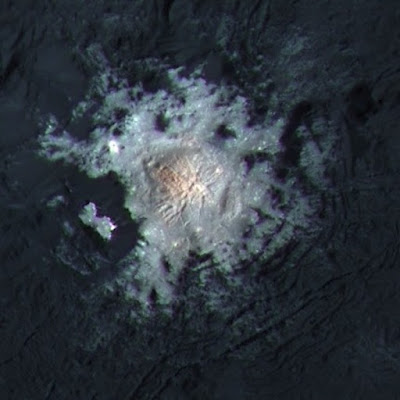 c) Looking for shapes and forms from the lentoid across the coloured dark photo and drawing them out in red
I can draw everything I see in the lentoid based roughly on land feature in as it is placed out in the photos of the Cerealia Facula area in Occator Crater on the Ceres planetoid, but it's about interpreting how the creative mind of that Mycenaean might have been working if he were to have seen a reasonably accurate picture of this crater, and there would be many different images of different one could make based upon that area of the crater, and this person's would have been defined by his or her culture . 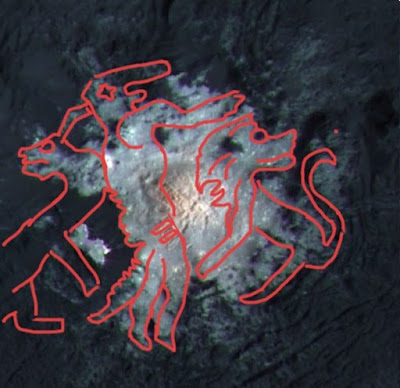 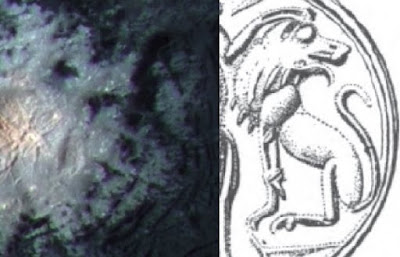 e) On the right of Cerealia Facula is a thing that vaguely resembles a giant head and shoulders sculpture looking to right and the black around that's the top and back of the head and beneath the jaw becomes the space between the back and the raised tail, so the face of this thing head and shoulders becomes the space on the right of the tail.
The alternative point view might be that the tail follows the outline of the shape that could be the left side of the face up as far as the area that might be the cheek curing around into an area corresponding to its eye 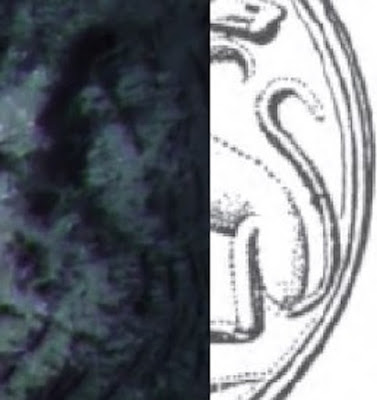 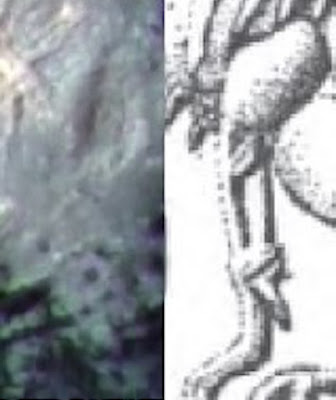 g) This area becomes the head of the creature. Unfortunately these parts of the Cerealia Facula don't have specific place names 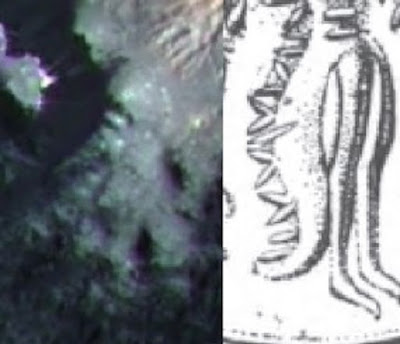 j) This area becomes the demon's head. It's is not easy to point anything out though, but I imagine that there is a sort of a dancer figure with stretched out arms and the right arm becomes the snout of the daemon

k) The area that becomes the demon's upper body, head and outstretched arm with a hand on the right lion's head

l) The area that becomes the right lion's head and the left arm of the thing that I think looks like a human with outstretched arms becomes the horn like ear of this lion. I can't find a main body below the head for this lion though and I'm not looking. 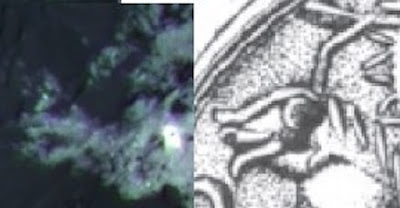 m) The cracks along the centre of the tholus becomes the two spikes along the waist of daemon and the back of the lion's mane. That is my interpretation.

o) Looking for shapes and forms from the lentoid across the black and white photo and drawing them out in red. There is some difference to what I can see in this black and white photograph, so it's slight different. There might be more different ways of thinking about how the shapes and lines from one becomes the other depending on the crater's visibility in the photograph 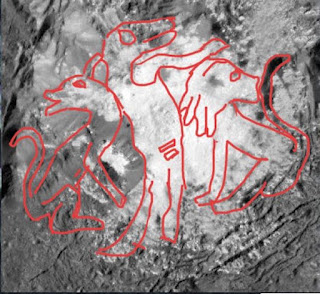 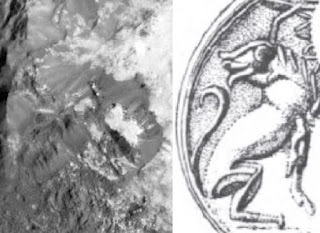 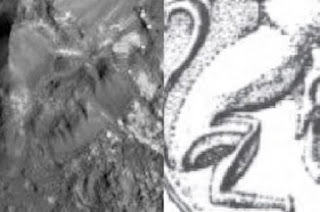 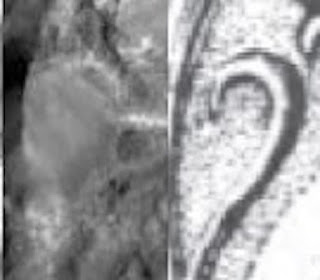 s) This area becomes its leg. 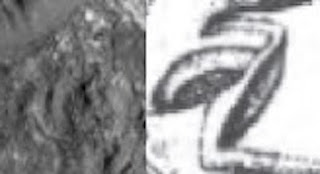