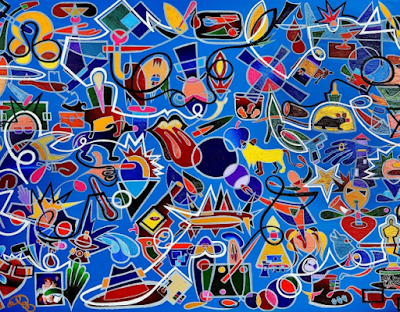 a) The composition is covered in images that are references to the various films and I'm finding enough people on the internet are pointing out the film references.

While I make a comparison between the two paintings, it's a very normal practice for all artists to start off with a painting or other piece of art that they like and the artist here has done something different enough with it to say it's something new.

Meanwhile I could see that it also looked as if the artist had read my blog here and had taken aboard some ideas, which he is free to do. Perhaps he came by the ideas via another method but I have had them blogged online for over a year before today as part of my explorations.

However the composition showed me how Giger's painting Alien Monster II also appeared to reference Demons tormenting St. Anthony (1520) by Niklaus Manuel Deutsch which is something that Ibelieve that Jigg's Jigsaw Puzzle (featuring characters from the TV series Jigsaw) ( Radio Times 19-25th September 1981) illustrated by Ellis Nadler does as well and that the Giger piece was referenced in that actual TV series puzzle

In "Demons tormenting St. Anthony "(1520) by Niklaus Manuel Deutsch, we have a horned demon who is tugging at St Anthony's beard, and in Giger's Alien Monster II we have this horned creature with beak like mouth resembling two fingers that would have evolved the demon's arms.

From the St Anthony picture I had  basically decided the detail had transformed into the Sherlock character from Jigsaw, before I had seen how the Giger was connected to the same painting by Deutsch

If we compare it to the creature in Giger's painting as if the open space between the upper and lower beak had become the arm, so the upper beak would have become the shoulder cape and the horns would become the front and back peak of the hat. The finger like beak could also be compared to the suitcase below. Obviously the illustrator was limited by the character's design as with everything in the puzzle, but this is how it fit in.

In Fesel's painting it has become a human character merged with a cockeral head with part of the wattle below the beak transformed into a boxing glove. This would represent the character from Scorsese's film Raging Bull. One can also think about the tormenting demons and their various wattle like appendages on the two upper ones in Deutsch's painting.