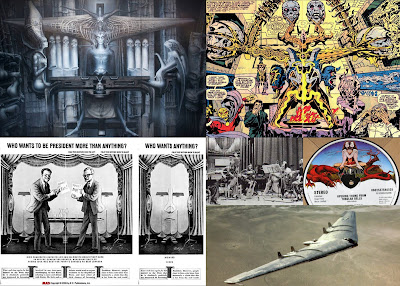 leading from
H R Giger's Art
and
Giger's The Spell i, ii, iii & iv
and
Exorcist
and
Jack Kirby
and
Wifredo Lam

a) Describing the painting
The Spell II was painted by Giger back in 1974. What we see in the photo are three females, perhaps witches involved in a ritual around a floating table, the two women on the side appear to have no legs and are connected to the table , and a victim's head is upside down and imbedded n the table. Giger had been able to explain something about this painting in terms of its central figure having her legs tied to a crucifix which has been inverted crucifix. The central witch has a very wide head dress that extends off near to the end of the painting. Embedded in her breastbone are the legs of a small Jesus Christ on a crucifix. The woman on the left has a hat like an Egyptian crown that is turning into a trilobite. The woman on the right have an elongated head that is growing into a separate body with legs, and she appears to have wings hanging down like tendrils, she also has tubes extending from the front of her body like breasts.. Perhaps she is in a state of ecstasy. Meanwhile there is a row of seven phallic babies hanging from the wall beneath the wide headdress, and the central witch has in her hands a phallic form like the tops of one of their heads. After working out that the Pantheistic Bes with wings had been part of the inspiration behind the Bes after the discoveries in The Spell I, I wondered if the outstretched head dress of the central woman was somehow the wings of a Bes. However the wickerwork that made up the head dress made me want to think about the Wicker Man, which had a giant sculpture of a human made from Wicker, in which a human was trapped inside and burnt alive as a sacrifice. This movie came out in 1973

b) Mad magazine fold-in idea?
The search for more Bes artifacts though did not really help me to get into the core of the image, however the inner Giger told me "Erm, step back from it". Then mentally pulled back from the image and waited for something else to happen in terms of having a new idea. I started to think about the two females separated by the expanse of the table and I wondered perhaps if they came together they would form something just as with the fold in page from Mad magazine. Here in the example below, two sides of Nixon's face are separated by a table.


c)  Making a split face to go with the Mad Magazine fold-in theory
The space beneath the arm of the figure of the right caught my attention,  perhaps it was shaped like Giger's eyebrow, with the arm widening near enough conforming to the ridge above the eyebrow itself on the side of the forehead and so the metal structure showing itself within becomes the eye. Where the buttocks of the woman is, would be where her nose is. I wondered for a little while if the ridge on the shoulder might be the hairline with the hair brushed aside. If it is to represent his face, I admit it is a little hard to really state it is something specific, because it's very unspecific and it's most likely that if he wanted to show his face in it secretly, he gave up any hope of showing a recognisable likeness just to make the human figures look nicely painted..

d) Seeing Signs of Tubular Bells
So where else was this going. I still didn't have much of a clue about what the point of this wide head dress was and then I suddenly took a look at the row of phallic fetuses whose symbolism I couldn't decipher, I wondered if they were organ pipes, but there was no sign of an organ being played and then thought, "hmm, they're hanging there like a row of tubular bells as in, ha ha, Mike Oldfield's Tubular Bells". This album was rather famous in its time and the title would have been on the tips of people's tongues. What's more the album was released in 1973, and the music featured as the theme for the movie The Exorcist in 1973.


e) Mysteries of tubular bell babies
Thinking about the Tubular Bells title is all very well making this association but was there something else to tie it further in. I had been looking for images of the time when it was released to see if there were images of real tubular bells. The photos of the peformance at the Queen Elizabeth Hall showed large metal tubes along with smaller ones from an organ and here curtains that suggested themselves enough in the painting. The large tubes, Giger turned into his tubular bells. Another aspect I would come to terms with on January 8th 2016 was the possibility that Giger might also have been inspired by a row long narrow cathedral windows that he decided to turn into tubular fleshy structures.

I took a look at the label for the record  and then noticed it was on the early Virgin Record labels and then I started to suspiciously notice how odd the label seemed with the image of half a woman reflected so that she had two heads, a conjoined shoulder and elbows, sitting with a tree to the right and a dragon around the bottom. The G in Virgin expanded into a strange black shape around the record hole with many possibilities.

Reading more about it: 'Famously launching with Mike Oldfield’s “Tubular Bells”, its success was pretty much guaranteed by the use of the music as part of the soundtrack to the film “The Exorcist”. Virgin went on to sign a diverse range of avant-garde, generally obscure artists, not really capitalising on this earlier ‘exorcist notoriety’ until picking up the contract of The Sex Pistols in 1977, who’d been dropped by EMI and A&M due to ‘adverse public reaction’ to their initial releases, thereby eradicating its outdated ‘hippy’ image and reinventing itself as a new-wave label.' (http://www.rarerecordcollector.net/virgin/)

'The ‘two virgins/dragon’ label design was dropped by 1975 and replaced with a simple graphic lettering label until being finally replaced by the now familiar Virgin ‘scrawl’ logo which has been subsequently adopted by all Virgin brands within the group.' (http://www.rarerecordcollector.net/virgin/) 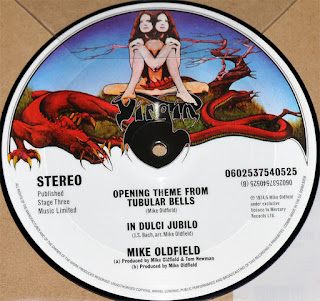 g) Looking for inspiration behind the central female and table in The Spell II
I looked further at the female figure and then noticed similarities between it and the central figure Giger's  The Spell II, along with other details. Note the position of the legs, the V shaped fused arms on the Virgin Label and the V shape in the table, the branches going through the shoulders on the label and the shoulder tendrils in Spell II.

The dark space between the two heads on the label becomes where the woman in The Spell II's head manifest. The shoulder in the label becomes reflected to widen and become the strange domed top of the phallic shape being handled on the table.

The black shape connected to the letter G on the label also becomes transformed into features of the table such as the legs, and also becomes the starting point the head dress of the central women and then it became more and more elaborate.

At the exploration ended, the Giger of the mind revealed "That's about it" 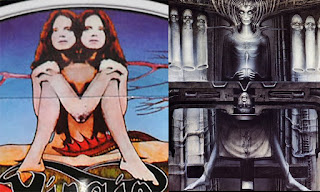 h.i) On 29th April 2016, I noticed the the similarity between Giger's Passage Temple; The Way of the Magician and a specific drawing by Jack Kirby for The Demon comic book story

h.ii) I decided that the wide head dress of the priestess resembles a Northrop flying wing aircraft such as a with a goat head in place of the cockpit.
h.iii) One can take a look at the horned head from Jack Kirby's The Demon with the pointed lightbulb shape in the centre which becomes transformed into a phallus and later becomes the central idea for Giger's Passage Temple Life.

h.iv) The whole of the witches's body appears to reference the general shapes and forms in  the picture from The Demon.
The elaborate arms of the sculpture in the comic book story becomes transformed into a wide headdress resembling a wicker version of a flying wing. h.vi) Further down and beneath that the yellow wavy column supporting this lead down to the diagonal supports at the bottom become transformed into the legs in Giger's painting, merged with the reflected legs from the Virgin record label.

h.vii) The beneath the left arm of the giant sculpture in Kirby drawing can be seen the puppets hanging in the distance and they contribute to the idea of the phallic baby heads hanging beneath the headdress in rows like tubular bells 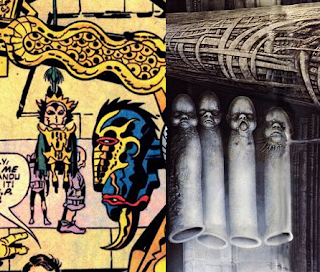 Jack Kirby appears to have based his ancient relic in The Demon on Wifredo Lam's La Noce (The Wedding) from 1947, and Giger found out and then combined ideas from Kirby's and Lam's images

The small inverted Elegua horned horned head in the centre becomes the sacrificial victim in Giger's painting and the chain of elegua heads at the base of the skirt of the central humanoid becomes the left arm of the idol in Kirby's illustration.