HR Giger: On the trail of the Pink Panther 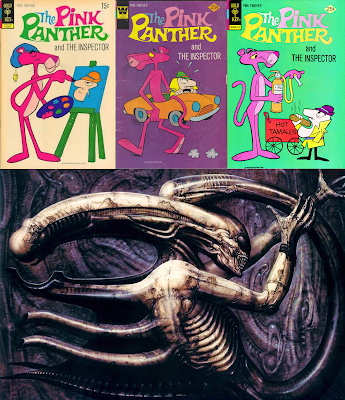 a) Giger's Necronom IV echoing the The Pink Panther.

a.i) There was a series of comics by Key Stone that ran from 1971 to 1980. Included in the image of three that might serve as good examples of things that could have caught Giger's eye are from 1973 to 1974, and so we would be looking for comics in this series up to 1976 since that's when Necronom IV was painted, perhaps in the middle of the year.

a.ii)  Connecting through Necronom IV
The connection came to me when I noticed that Giger had some some weird cartoon drawings of his Alien beast as if it were cartoon character getting into acts of skiing, fonduing, having sex with women, and this lanky form seemed to remind me of the Pink Panther a little, while recalling that one could perhaps make an animal face out of the Necronom IV head, as if it were some sort of a camel head with the face as a snout and the hanging pipes at the side of the head as an eye, and perhaps this could be the Pink Panther has if he has had an Akhnaten style extended cranium and his nose has become the black eye of the beast.
a.iii) So perhaps here were have another key to what Necronom IV is in terms of a conversation, with Inspector Clouseau as the upper torso up to the shoulder along with his nose as the upper arm and with that perhaps he is included as a separate entity in the form of the tiny skeleton corpse in the end of the tale.

a.iv) This came to the surface perhaps because the Return Of The Pink Panther was on British television (was it Sony Channel or True Movies channel?) on February 11th 2018 TV which was shortly before the The Black Panther opened in the UK cinemas..

b.i) See: Comparing the cover from The Pink Panther #5 to Necronom IV 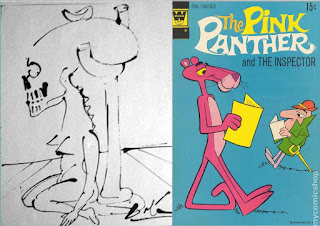 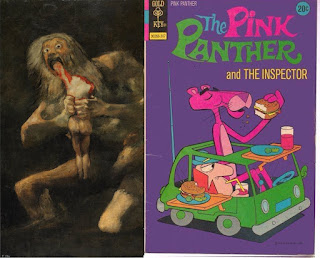 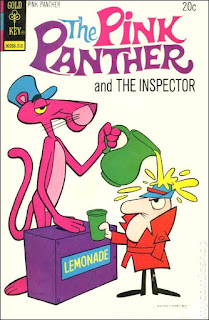 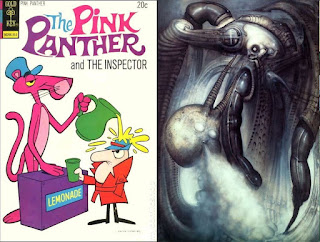 g)  Pink Panther and the inspector #18 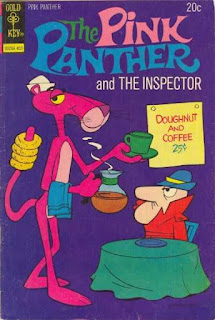 g.ii) See: Does the cover of The Pink Panther comic No.18 reference the Henu Barque? 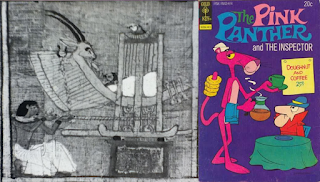 j) See: Comparing a panel from The Pink Panther #24 to Necronom IV.

m) See: "The Inspector and the Pink Panther comicbook #16 (November 1973) is referenced in ´Biomechanical landscape ii" ? 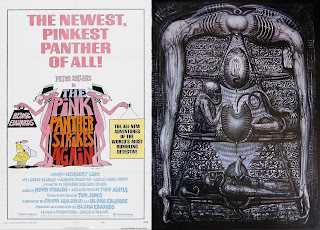