leading from
The Betty Hill star map trail
and
HR Giger's ZDF (work 433) (1980) references the Betty Hill
star map via both the "Dogman in Doktor Oktorpus Nonplussed"
(1976) written by Bill Fisher and drawn by Hunt Emerson and
Drax's Space Station for Moonraker via Peter Till's radio times
illustration for The Risk Business?

a) I had already decided that the painting ZDF referenced a panel from the "Dogman in Doktor Oktorpus Nonplussed" from p 28 of Dennis Gifford's Ally Slopper #1 (1976) drawn by Hunt Emerson, from Alley Sloper#1 which I had realised referenced the Betty Hill star map, and then realised that it too referenced the same map amongst many other things.

Then I decided that  the name of the television channel ZDF channel name seemed to loosely echo the idea of the name Z2R which is short for Zeta II Reticuli which is a star associated with the star map as drawn Betty Hill based on a holographic map that she believes she witnessed during what was understood to bean abduction aboard a space craft by extraterrestrials .

b) In the map by Betty Hill, there near enough appears to be a diagonal line of stars starting from the upper right going down to the bottom left that are not linked up, and this becomes the sword like device stretching across the painting in a similar way.

Then there is a line going from the upper right to the centre, and this appears to become a long outstretched arm supporting the testicle like organism

c) A point here to note, a star assumed to be Gliese 86 on the far left of the horizontal row of lines going through the centre, becomes a valve or orifice of one sort or another. 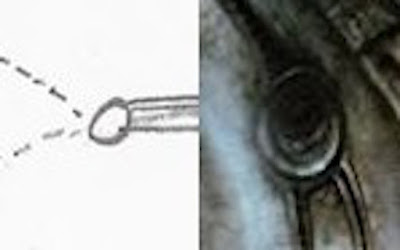 d) With Gliese 86 on the far left as the valve, the star along the line of the fold that appears unconnected to anything else and is briefly assumed by Marjorie Fish be Fomalhaut, might well be where two beams of energy crisscross from the mouths of two strange creatures, and from the lower one with the rodent teeth, from its tail there's a beam of energy directed at a disembodied face further up the sword like device.

If you might want to say that these beams of energy are just water or even paint being sprayed, that might even be fine.